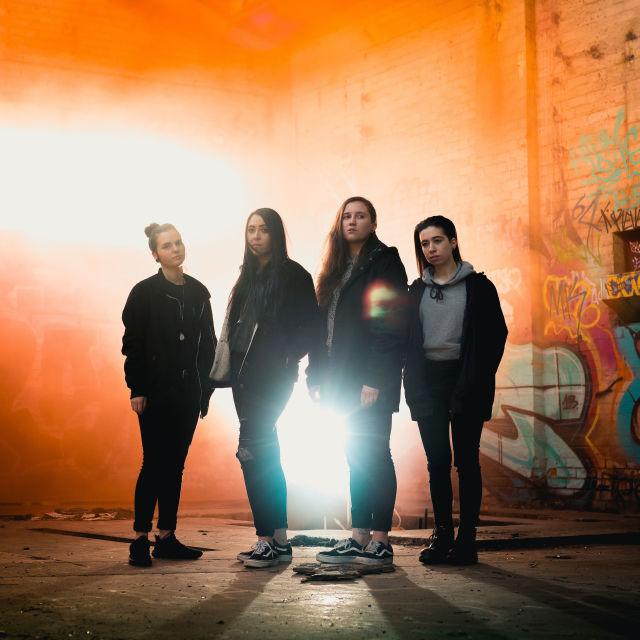 Very rarely does one come across a band that hits as heavy and magnificently as The Beautiful Monument. Boasting an arsenal of genuinely memorable songs and strong, energetic stage presence, these ladies are ready to take on the world.

Q: What advice would you give yourself when you first started?

A LOT of people are going to be downright assholes or piss you off in life so just gotta keep on keepin on kid.

Q: What things have you learned and wish someone had told you?

That communication is the most important thing in a band; make sure you listen. In saying that, people also aren’t mind readers, soooo, don’t bite your tongue just for the sake of keeping one person happy and fight for what you believe in. It’s not always possible to be on the same page as everyone when you throw a diverse bunch of personalities into a project, but compromising is definitely a thing that you have to accept and learn to deal with.

Q: What are your goals in music?

Personally, I want to tour more. There’s nothing more satisfying than doing what you love with your best friends and seeing new places whilst doing so. Not to mention it gets me the hell away from my day job… the further the better, like… take me to a different time zone.

Q: Where do you see your music fitting in on the Australian music scene?

TBM’s genre is kind of odd, like… Still couldn’t tell you exactly what genre we are because I don’t think we actually have one. We’re a little bit of everything. Sugar, spice and everything nice, add some chemical X and you get musical Powerpuff Girls… except we all look like Buttercup. Because our songs are so diverse though, we could literally slot in nicely with any kind of band/tour/festival and that’s kinda dope I think.

Q: Who inspires you in music?

So many heavy bands have inspired me to be a musician – A Day To Remember, Bring Me The Horizon, System of a Down, Korn, just to name a few. I literally wanted to be Max Green (OG bassist of Escape The Fate) when I was thirteen, that’s why I started playing bass. It wasn’t until a few years later that my music teacher found out that apparently I could sing (news to me) and he pushed me to keep going with it, so I did. As for the content I write, that’s all inspired by negative people and events in life. Our songs are literally Diary of an Emo kid, especially the stuff I’ve been writing lately.