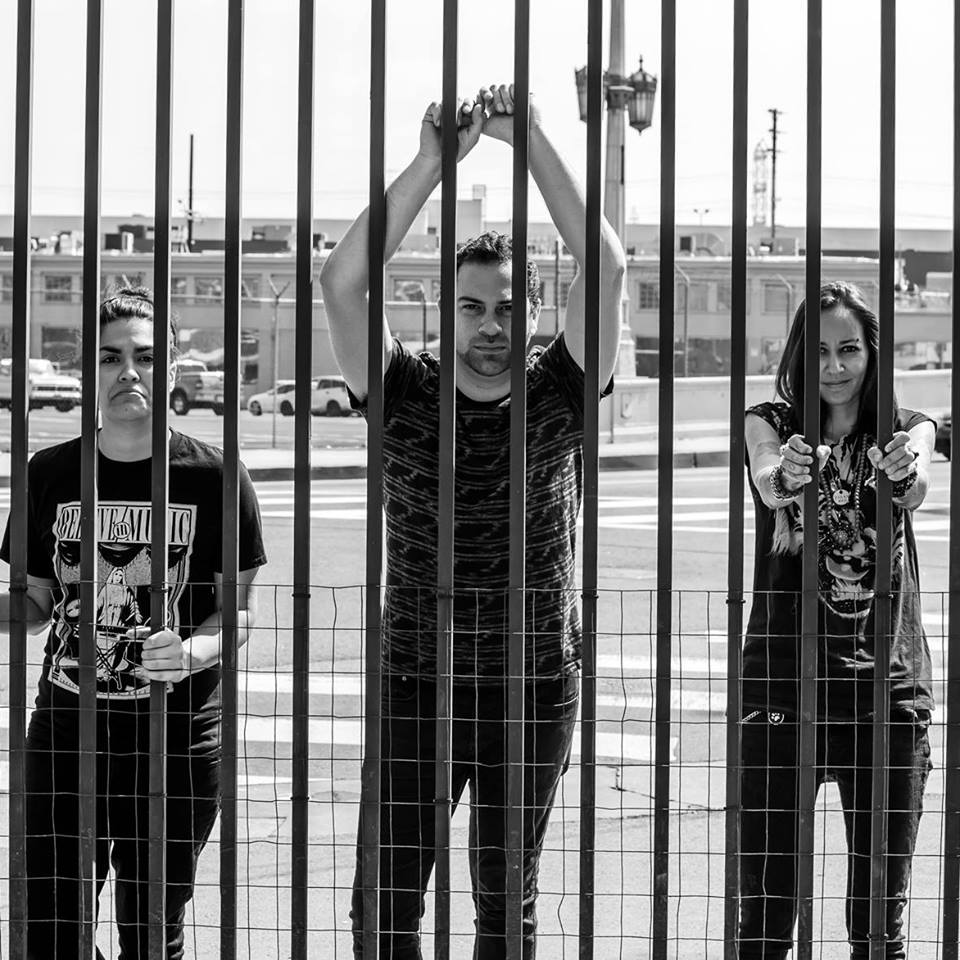 Tarah Who? is an LA based, independent rock, grunge, garage, Cowpunk Rock band originally from France. We caught up with the band for a chat about music, what challenges they face as female musicians and the difference between the American and French music scenes.

You describe your sound as Cowpunk Rock Alternative Grunge which is quite an unusual term – what does that mean?

MP: It’s just that fitting our sound under one category is not accurate.  TW?’s music is written not to fit any particular category either.  As a band, we love and have been influenced by all of those categories so I guess it’s natural that TW?’s sound is the same.

TGC: Well… 🙂 when introducing or presenting our music, technically, we are just a loud Straight up Rock band. During our live shows, we have a lot of fun, we scream and shout a lot, fast paced-guitars and drums, people started calling us punk out here in Los Angeles. We used to say that we were just a rock band, but then promoters would book us with 80s rock, Indie Rock, and pop rock bands and it just didn’t fit. We were always the loudest and heavier band. Promoters and fans actually started calling us Punk. I never thought that “punk” alone fitted our music. We were booked on a few events in the US and in the UK as a punk band, It was a lot of fun, same energy, but still a different sound… Matt mentioned on day, “hey.. Did you know that there was such a thing as COW Punk?” I looked it up, and I thought that the definition was PERFECT! Cowpunk is a mix of country and punk rock, which fits us perfectly! Alternative, and Grunge, because we love to make extra dirty noise!

You’ve been described as the “female Pearl Jam” how did you earn that title and how does it make you feel?

MP: I understand that Grunge plays a big role in TW?’s music so that makes sense.  No sure how we earned the title female Pearl Jam because I don’t think we sound anything like Pearl Jam per se.

Do you think as a female you face any different challenges in the music industry?

CH: Yeah, it’s more difficult to do music as a female, there is always this discrimination against women even in our days.

TGC: Oh really, Coralie? I think it is actually changing. I used to think that it was more difficult yes. NO DOUBT! I was really shy and young when I started drumming. I was 14, and NO ONE took me seriously. I remember asking this teacher at a music school in Paris (talk about a teacher…) If I could join his class, and he responded by saying (after looking me up and down) “well… have you ever…tried? Do you even own a drum set?”

“Yes, and I have been playing it for a while, playing with other people and while listening to music” He said “Oh ok.. Well why don’t just keep doing that and maybe in a few years you can come back and we will see”

Also, one time, I had saved money for a while so that I could buy my dream electric guitar: a Gibson ES335! I walked into the shop, and I remember going with a guy friend of mine, BECAUSE I knew that they would take me more seriously!( I know.. sad!) Well sure enough, I walked in and no one greeted me, he walks in and he has two sales persons greeting him. They though that HE was going to buy and asked HIM what he wanted. I said that I wanted to try the ES335, they laughed, and said “We can only take them down for serious customers. They are really expensive guitars” I swear! My friend was shocked, he didn’t want to believe me when I mentioned I was having a hard time in music stores. Now he was a witness! We left saying that it was too bad because I was ready to purchase. They tried to call me back in but of course I never walked back into that store.

I also faced a lot of discrimination auditioning for bands that thought that it was a guy’s instrument to play the drums. Shopping for drumsticks or drumheads, you can also tell sometimes that people look at you with a lot of thoughts. For some reason, I have not really experienced that playing the bass in bands! I don’t know.. Maybe guys think that, Bass is sexy on a woman!  (Or that it’s “not too physical, or no solos” so we can handle it!).

Starting as a singer, songwriter was… intimidating. I would go up on stage, all shy and sing my songs. People would be surprised because they would be expecting some girlie pop songs (Nothing against that, It’s just not what it was). I met SOOOO many “producers” or “A&R”‘s who wanted to make me the next whoever. (I think it was Avril Lavigne at the time.) For some reason, guys only approach girls and offer them “great” opportunities!

Note to self -ladies: If you want to play music, you go ahead and just DO IT! What you have in your head, only YOU can create it and make it alive. You can, along the way meet partners that understand where you are going. Be aware of those so called producers that talk a lot and deliver nothing. It’s a waste of time. Know what you want, and make it happen.

When I started playing as a band, sound engineers expected me to be all cute on stage (you could see the body language of “ah.. another one”) and when I started screaming and growling they would tell me after the show things like “I had no idea sounds like that could come out of girl! Loved your set! What’s the name of the band again?”

So YES! To answer your question, I definitely think that female artists face different challenges in the music industry. HOWEVER, I truly feel the difference TODAY. I don’t have those problems in music stores anymore, quite the contrary actually (I don’t know why.. I don’t have any money!), Women dare more today, they are not only singers, they are musicians, artists. There are more female musicians, and mostly ballsy female artists that are not only showing their body, to get attention. Also it seems like female musicians have stronger opinions about their art and music, they will defend it more, and better. They work hard on their chops and skills. We are definitely more out there.

CH: In France the music scene is really closed, it’s always the same people. Here, you have more chance, people will let you try and that’s really great.

TGC: As a musician, you have more opportunities here, I think. It depends on what genre you play but for us, there are definitely more and better shows out here. Once we are well known, then France has a great music scene. Like Coralie mentioned, it’s a very closed scene. You have to know people, and they are always the same. It’s a shame because there are a lot of great musicians in France too, but they can’t break through. I like the crowd better in France sometimes though. Here people are shy 🙂 In France or in the UK, people dance, people jump and mosh-pit. They come out to have a good time and trust me, they will!

I like the professionalism and effectiveness of the Americans, but I prefer the family-artists exchange in Europe. In Europe, people are so happy to have you that even the boss ends up drunk with everyone! It’s really cool. It makes all shows memorable.

What inspired you to make the move to another country?

CH: I really wanted to go to a music school where you play music all day and I found the Musicians Institute in LA.

TGC: I went where the music that I love and write was at. For us, LA is where you can make things happen. It is not for everyone or for every music, but LA is what fits best for us.

As a child, I travelled to the US every year for 2 months to be with extended family. I always loved America’s mentality, and lifestyle. I have always felt more like me in the US than in France because no one judged me for wanted to play music for a living.

Today, I can be anywhere in the world and still play music. I can write, record, perform form anywhere, I would be fine. Everything really happen online now, and then when you perform, you tour. It makes you be more part of the world, and not attached to one country.

What is up next for Tarah Who?

MP: We have new material we are working on.  A host of shows before the year is over and tours we are scheduling for the coming year.  Videos and other promos will be out soon as well.  Get all your exciting Tarah Who? news at tarahwho.com!

CH: We have a new EP coming, we gonna do a tour to promote it in April in the USA and maybe in France after that.

TGC: Music videos, new ep, some shows, a US tour in April, and European tour following this US tour.