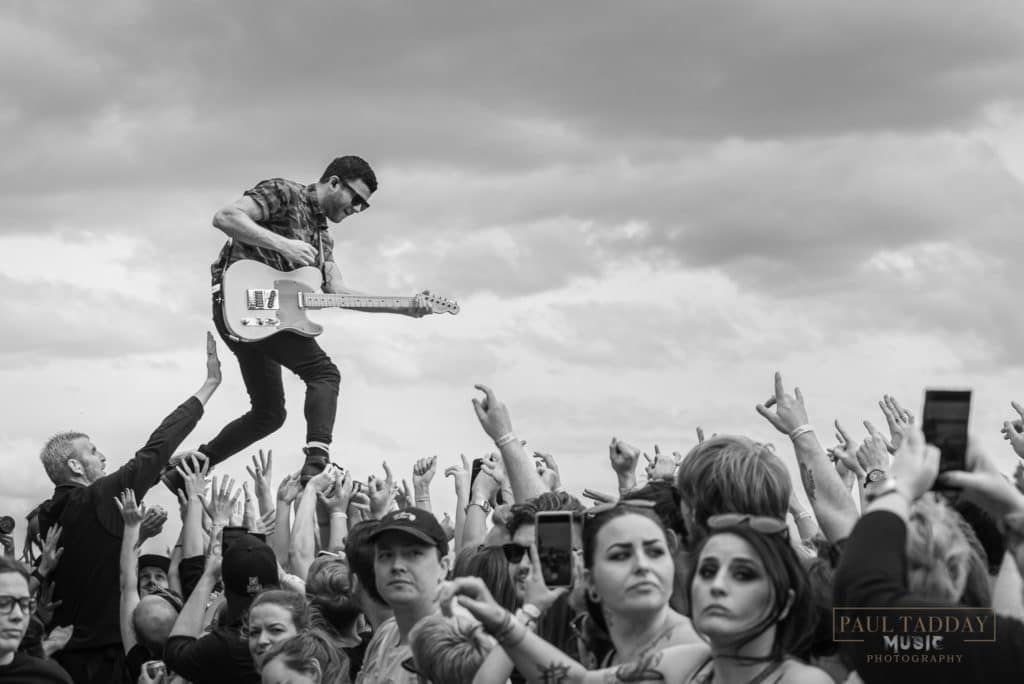 For some time there has been a gap in the festival season for heavier music, and thankfully Good Things is back yet again to fill that much needed gap.

After a successful inaugural run last year the festival is back with a bigger and better line up.

Melbourne locals The Bennies get things started off early over on stage three and its full throttle nice and early. Always a good staple to any line up, the bands high energy performance is enough to lift the spirits of everyone in attendance. Frontman Anty is in fine form with his signature leggings, covered in weed. These guys always blaze up a line up and this performance is no exception.

Boston natives Ice Nine Kills follow up, the horror- inspired lyrics of their music taking things to a new level. Having released a new album this year the band showcase a variety of music for eager fans. Dressed as Freddie Kruger, complete with the mask and all frontman Spencer Charnas rips it up on stage.

Windwaker have had a dream year this year having dropped EP ‘ Empire’ earlier in the year. The momentum for the band cracking on with a stellar performance over on Stage Five. The band have gained attention this year and this performance will certainly have more people talking about them.

Pretty soon its time for the late edition to the line up The Butterfly Effect. These guys have to be one of the best live bands of the day, frontman Clint Boge proving he really does have one of the best voices in the industry. After a long time on the touring circuit this year, they are a welcome addition, having replaced The Damned Things, Clint is happy to be here and it shows in his high octane performance.

The Veronicas seemed like a pretty unusual addition to the line up, but the pint sized poppets make it count, showing the boys how its done. They may have copped heat for their addition to the line up but they won’t let it stop them at all. Dressed in snake skin patent leather for all the 90s feels, the promised Wall of Death goes ahead and soon bodies are flailing all about the mosh pit as people charge headlong at each other.Good on them for giving it their all, hats off to these girls representing 90s nostalgia.

The Beautiful Monument also representing the women, the all female Melbourne band pump out the hits, much to the delight of the crowd. Boasting some powerful guitar and laden tracks the girls take
metal- punk to a new level with a highly energetic performance.

As the sun begins to set things show no sign of slowing down with Karnivool over on Stage Four. Ian Kenny on vocals is mesmerising, his vocal range really is something else, making him a delight to watch. He gives every moment on stage every ounce of his being, and its truly an amazing sight. As the sun dips below the horizon, he heats things up for the pit.

Having released new album ‘Human Target’ Sydney death core band Thy Art is Murder give a solid performance. They challenge the crowd with themes of fear of mortality and anti- intellectualism, the performance a thought provoking event, making us feel as though the Apocalypse truly is upon us.

As the day draws to a close and another Good Things is almost over Parkway Drive prove to everyone why they are one of the most exciting touring bands in Australia. The end the day lighting the place up- literally with pyro and flames lighting up the stage, proving why they are headliners. Its an unforgettable set and sends everyone home talking about it.

Good Things has been a refreshing addition to the festival season after Soundwave left such a void in the heavier music scene. Its been a day of bands enjoying every moment, fans dressed in black moshing, bodies crowd surfing and some very memorable performances.