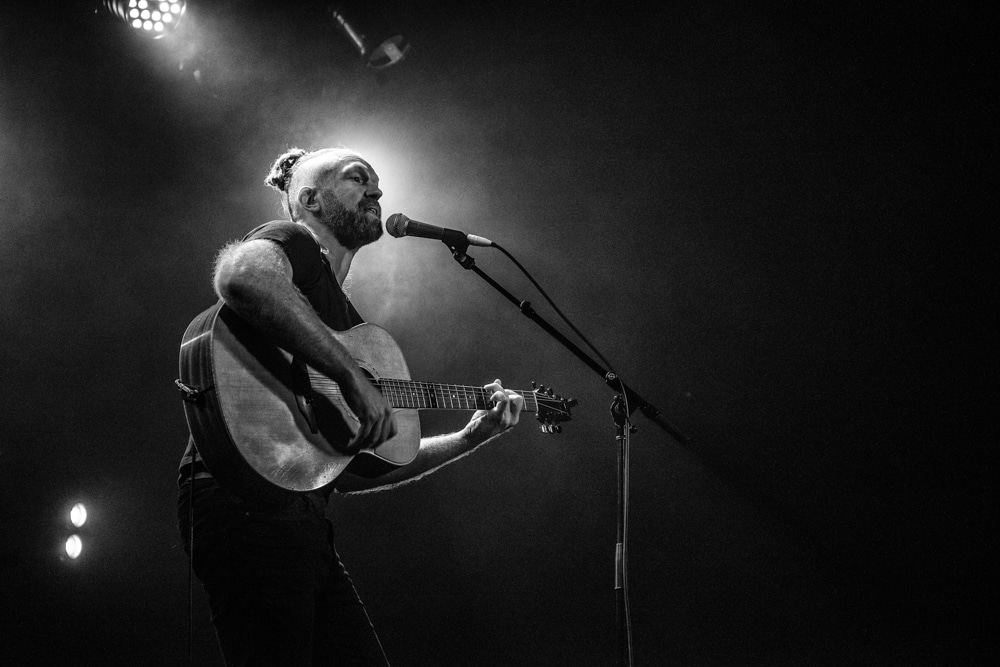 Lining the stage with not one, but three custom guitars it is clear this evening that Newton Faulkner has come to impress.  Making it seem effortless, the guitarist is both engaging and a sonic delight. As his hands expertly move up and down, over and under the frets Faulkner plays guitar like no other.

Having released a ‘ Best Of’ ‘ album this year Faulkner is back to play intimate shows in Australia and his charisma and charm win over the audience quite quickly.  Not one to take himself too seriously Newton is the kind of performer that makes you feel like you’re hanging out with a mate and having a good laugh.  He’s witty and his on-stage banter is charming.  When an over excited audience member shouts ” I love you”  he quickly retorts  ” Thank you, and I could learn to love you, with enough time and alcohol” , sending the audience into hysterics. The laughs don’t stop any time he speaks, and this delights Faulkner himself, often laughing along at his own humour.

There is more to Newton Faulkner than just a few good laughs however. He glides through the set list with ‘ Clouds’, ‘ Brick by Brick’, mesmerising the crowd with his cover of Massive Attack’s ‘ Teardrop’ a song that he does more than justice to.

The crowd this evening have fallen in love with Faulkner and when the opening bars of ‘ Dream Catch Me’ start the entire room spontaneously erupts into one huge sing along. Most of the night has been singing along as Faulkner makes the crowd his own backing singers, dividing the room into parts and giving each group a part  to sing.  He goes off the set list for a moment when a request comes from the crowd for ‘ This is It’ – improvising the arrangement as he goes.

Closing out the night with a delicate rendition of Queen’s Bohemian Rhapsody, Faulkner quips that he’s almost afraid the crowd won’t allow him to leave. He indulges with one last song before leaving the stage.

There is a certain something that Newton Faulkner brings to the stage that makes him a wonderful entertainer to watch.  Whether its his incredible guitar technique, endearingly funny banter or his ability to cover old songs and make them fresh its hard to say, but Faulkner certainly is one of the best.