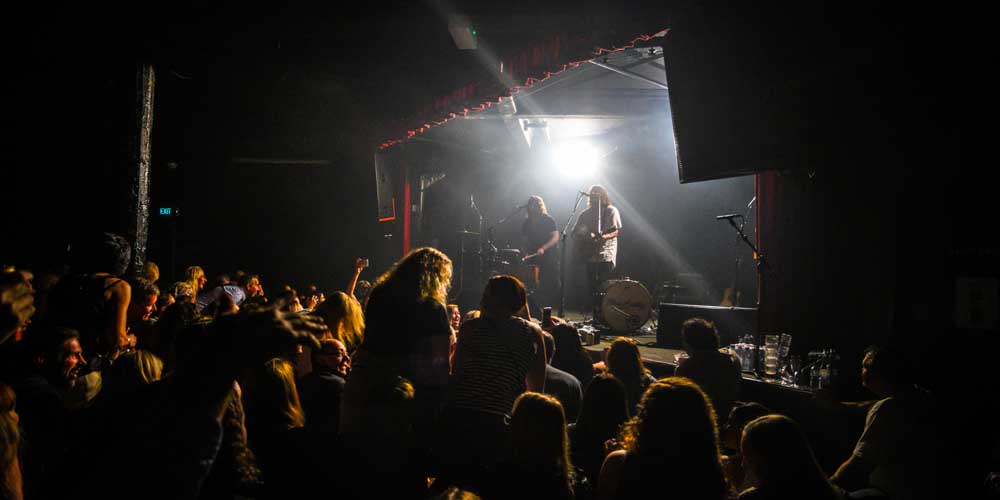 The room is heavy with anticipation as Jack and Pat Pierce prepare to take to the stage at iconic Melbourne venue The Corner Hotel. Her band room empty for so long while a pandemic ravaged the country and the music industry, now alight with smiling faces eagerly awaiting the twins.

Having released an album last year, this is a belated tour and a chance to hear some new songs from the album. Its also a chance to bask in the infectious energy that is Jack and Pat Pierce.

Having been entertained by local girl Steph Strings during a set reminiscent of early John Butler styled guitar, the crowd is ready to dance, sing and forget the outside world for the next hour and a half.

Opening with ‘ White Caps’ followed by ‘ Kanko’ the audience are treated to new music straight away, and as the room begins to get into the swing of things and all thoughts of social distancing quickly disappear.

Attending a Pierce Brothers show is always an interactive event, and the smaller venue allows for this, as Jack runs through the crowd drumming on the much loved Corner Hotel pole, and pretty much anything he can find. When you’re Jack Pierce the whole world is your drum kit, and fans are loving the interaction. Moments like these where musicians are able to get up close and intimate with audiences make for memorable shows where mobile phones capture every encounter.

Racing through the hits ‘ Amsterdam’, ‘ The Records Were Ours’ and ‘ Trip Lovers’ the duo take time to speak about how much they have missed being able to play for fans and how difficult things have been with the absence of live music. When you can create energy like this that lights up an entire room, its easy to see why they have suffered withdrawals- the dopamine hit is enough to last days.

Slowing it down marginally to wrap up the evening with ‘ Golden Times’ the room is bathed in yellow as sadly our time with them is drawing to a close. Its been a wild ride as usual and the duo have bought everyone together to laugh, dance and sing at the very top of their lungs.

Closing the night with ‘ Flying Home’ Jack calls on the crowd to crouch down low, exploding into a final frenzy before the night wraps up and we all head out into the chilly Melbourne night and back to reality.