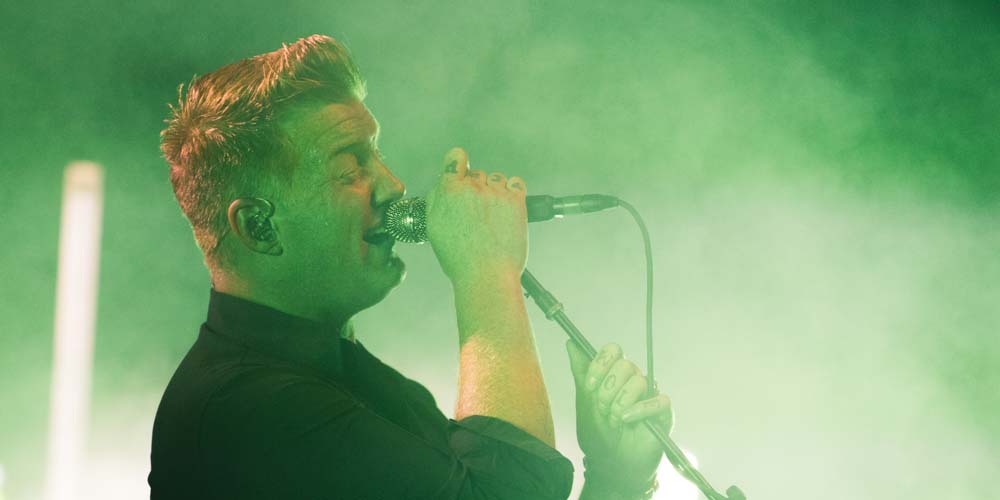 The Queen has returned to Riverstage! That is of course the rock gods Queens of the Stone Age. As the crowds begun to collect it was clear Brisbane was ready for some face melting rock.

As the night kicked off our very own C.W. Stoneking hit the stage. It’s no surprise QOTSA chose CW as their support. Chris was only bound by his own strings after snapping a string in the first song.  A fantastic mix of blues, was exactly what was needed to get the night under way.

Darkness filled the stage as front man Josh, the timeless rock super star, made it very clear he was out ready to show everyone a good time. Dressed in black from head to tie, paired with cowboy boots, it was certain we had to hold on tight. He was about to give us the ride of our lives.

‘If I Had a Tail’ filled the air. The build up from voice and guitar, to full band in the song was perfectly executed seamlessly. Every member on the stage was throwing their spice into mix to create the masterpiece. QOTSA have certainly mastered the art of mesmerisation. Next was ‘In My Head’. The energy from there continued to climb. A slew of head banging was everywhere to be seen, not a single person was standing still. Whether you were young, old, or somewhere in between the rock had taken over. ‘No One Knows’ started, by this point the smell of beer and sweat had very clearly taken over The River stage.

QOTSA bassist Michael Shuman brought enough energy for himself and the crowd. Spellbinding bass lines, and silky smooth tones had the who crowd going.  As everyone attempted to sing happy birthday to Michael, Josh made it very clear we didn’t have any business singing.

Sick, Sick, Sick, strung into action as the mosh pit really took a turn for max energy. There was no stopping the sweaty drunk mania. Pushing and shoving was now a normal way of greeting the person next to you. QOTSA finished with ‘Go with the Flow’, but the crowd was hungry for more.

‘You Think I Ain’t Worth a Dollar, but I Feel Like a Millionaire’ erupted for the encore, followed by ‘A Song for The Dead’. The last song made it feel as though we were stuck in time. The mosh was at full intensity, and there was carnage everywhere.

Words and images  by Zac Montgomery