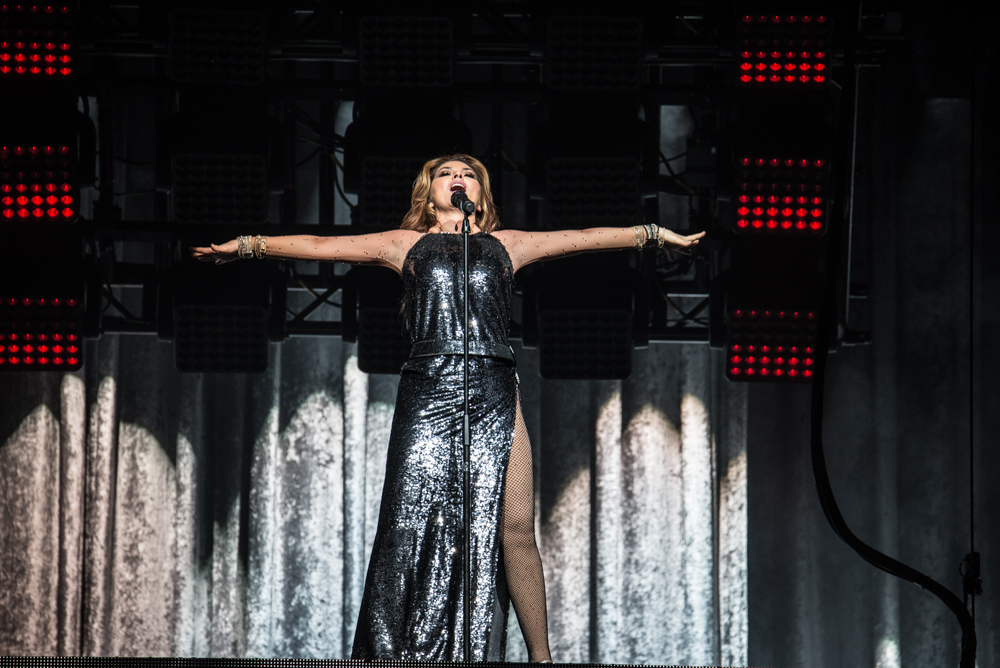 Swiss singer songwriter Bastian Baker warms up the audience with an energetic performance. It’s his second time in Melbourne but his first official tour down under. He plays a brand-new song called ‘Stay’ and notes that most of what we are hearing tonight is probably new to us since he’s only just released his music in our country. He includes a beautiful cover of Leonard Cohen’s ‘Hallelujah’ and an ocean of phones lights up the arena. Baker shouts out across each side of the room without a microphone as he tries to get the audience fired up as if we’re witnessing Roger Federer win the Australian Open. This is show number 71 of this world tour so he knows how to do it like a pro.

A drumming solo welcomes the one and only Shania Twain into the arena as she enters from the lower section of the crowd and walks through the audience towards the stage. She sweeps the floor with her glamorous sequinned dress and a cowboy hat to boot. “Are u ready Melbourne?” Shouts Twain, before she kicks off with the lead single (‘Life’s About To Get Good’) from her new album ‘Now’. ‘The stage comes to life with an incredible live band and five large cubes that move around the stage and display eye-catching visuals.

“Whenever I feel down I think of this song and it brings me right back up again,’ says Twain before singing her inspiring hit ‘Up’ as she’s elevated to the top of one of the cubes. Twain is known for her uplifting and happy anthems like this but some of her new material including ‘Poor Me’ also addresses some of the lowest moments of her emotional life as a therapeutic way to move forward and try and help her listeners at the same time. A leopard print veil falls over the stage and she delivers a very personal moment with such courage and grace.

Twain takes us deep into her country roots with a few boot-scooting moves as she joins in on a line dance whilst her band strikes up the fiddles for ‘Honey I’m Home.’ It’s been almost 20 years since Twain toured Australia, but she’s welcomed so warmly and she makes it a really special and wildly entertaining show for her fans by playing all her hits and some new songs too. An electrifying instrumental takes place before Twain pops up in the middle of the crowd on a revolving podium for a nostalgic performance of a crowd favourite that serves as a touching reunion with her fans. “Melbourne you’re still the one!” she exclaims. The audience’s response reciprocates this feeling about her. Twain is escorted back to the main stage following a leopard print train of fans known as the ‘Shania Choir’ who are invited to meet and serenade their queen. There’s a lot of hair and leopard print as the choir perform an A Cappella style rendition of ‘Black Eyes, Blue Tears’ and ‘From This Moment’ which turns out to be a surprising and touching moment for all.

Twain gets a boost up onto the grand piano for a song (‘More Fun’) that was inspired by the movie Magic Mike. Her dancers channel their inner Channing Tatum as they perform a strip-tease inspired routine with chairs. Twain puts a black coat on and top hat (the original prop from her iconic ‘Man! I Feel Like A Woman!’ video clip) and makes a toast with a glass of champagne. “Like most of my songs, this one started with a basic jam lyric and I’m still having fun with it all these years later,” she reveals. Twain continues to take us on a journey with a montage of her video clips through the years including picturesque locations from the pyramids of Egypt to riding horses in the desert and walks along stunning beaches. “I’ve never made a video in Australia but it’s on my bucket list,” she says.

Baker joins Twain for a party anthem duet and her favourite summer song ‘Swingin’ With My Eyes Closed’ and the crowd has lots of fun fist pumping along to the upbeat track. An electric rock n’ roll instrumental leads into the final song ‘Man! I Feel Like A Woman!’ And Twain proves that after all these years she still knows how to impress us.

Words by Michael Prebeg
Behind the lens Amanda Lee Starkey