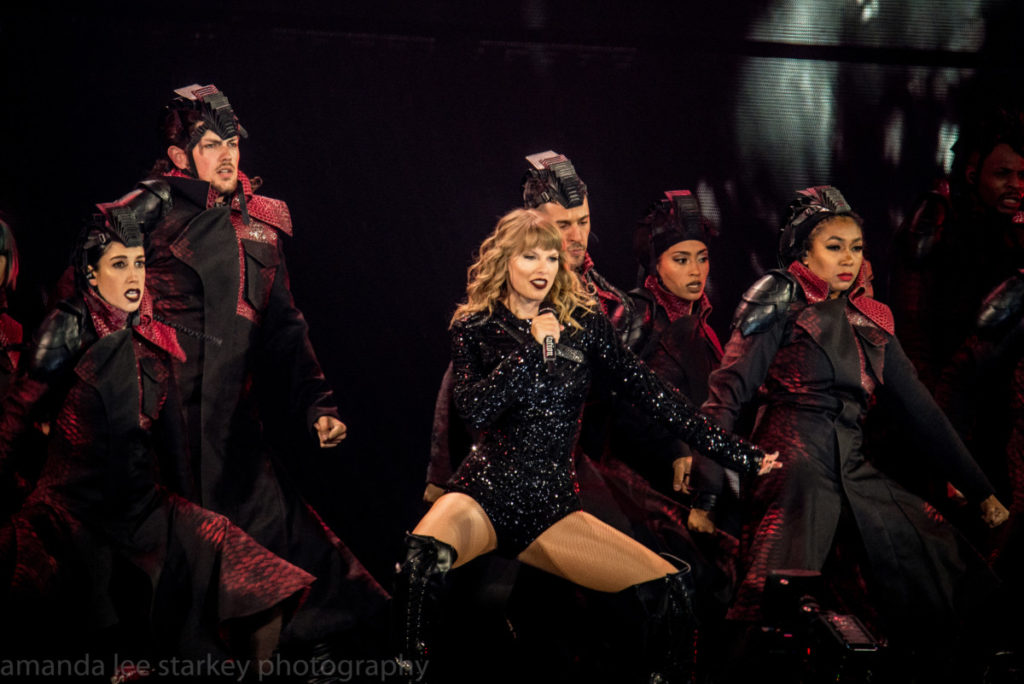 Taylor Swift arrives in a plume of smoke, dressed in a black bodysuit, sparkling and larger than life. Having released  her defining album ‘ Reputation’ in 2017 Taylor is here to set the record straight.

Having copped a battering in the press and nasty bullying from Kayne West and  Kim Kardashian, Taylor is a shining example of how to turn disaster around and own it. Snakes adorn the screen in a blatant snub to Kardashian and West by making light of the damage to her reputation.

Opening the show with a video introduction featuring news clips of media stories she bursts straight into action with a flurry of dancers around her as she belts out  ” …. Ready for it”  to kick off the show. Every second is perfectly timed as dancers flip, lift and fly across the stage in impressively choreographed routines.

As the stadium is a glow with LED wrist bands designed so that Taylor can enjoy her fans having fun, inflatable snakes encompass the arena, red eyes flashing in a hypnotic dance. Inviting support act Charlie XCX onstage as confetti cannons explode for the smash hit ‘ Shake it Off’ as Swift dances in a rainbow colored sequin dress.

Moments of vulnerability shine through at times as she slows things down for acoustic numbers ‘ Dancing With Our Hands Tied’ and ‘ I’m only Me When I’m with You’ – a song written when the star was a mere thirteen years old that remains a strong fan favorite.

Its back to business for ‘ Blank Space’  and the crowd is soaking in every moment as wrist bands are thrust into the air as high as possible in sheer enjoyment, smiles reflecting the star on stage.

Making her way back to the main stage via a large snake skeleton for ‘ Bad Blood’ dancers abseil down the front of the arena in impressive death defying moves as the song transitions through to ‘ Should’ve Said No’ and back again. Her costume changes are seamless and her performance is flawless.

For a woman that has written an album based on the concept that a reputation is merely another person’s interpretation of yourself Taylor has excelled in the art of profiting from pain. She has the ability to take all that is bad and turn it into positiveness – something she needs to be recognized and commended.