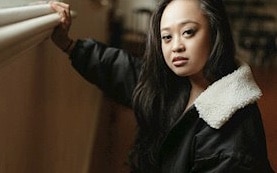 Eli Dan’s debut single Treading Water seeks to rise above the swell of the music industry, addressing the resilience and focus needed to ‘keep your head up’ and achieve your goals in life.

The skillfully balanced harmonies gently help to unfold the narrative, as singer Elisha Apurado soulfully rich voice carries you through the emotions, questioning motives and searching for answers. With an indie-gospel kick, this electronic pop ballad builds upon organic musical concepts and comes to life through electronic flourishes, becoming emboldened by an unwavering passion. Produced and engineered by Elisha in her home studio, the origins of the track stemmed from the constant disappointments in the music industry and how they’ve overcome those hurdles to get to this point.

Eli Dan is Melbourne-based songwriting duo Elisha Apurado and Danny Hacket. In 2014, Elisha and Danny started writing whilst working on Danny’s solo project and instantly they formed an undeniable chemistry for writing lyrics and music. Through the years, they have written songs with numerous local and international artists including X factor finalists Omar Dean and Jordan Rodrigues as well as having worked with multi-platinum awarded, ARIA and Golden Guitar nominated producer Jimi Maroudas. They are now putting their own names to the songs they write, in late 2018, they decided that Elisha would bring their songs to life on the stage. Although both deriving from different backgrounds, they have come together to be unashamed storytellers.

Treading Water, comes from a place of heartache and self-realisation in the face of adversity. An all too common experience for those striving to breakthrough in the creative arts. The defining feature being the emphatic refusal to lose hope, rousing the positive spirit in all of us.

‘Treading Water’ will be in digital stores on the 6th of December.

View all posts by 27 Magazine
Older News: alt. make their debut with new single “Insubordinate” ahead of Young Lions support slot Newer News: THE BUCKLEYS ARE COMIN’ FOR YA (LOVE)r
Latest posts in the same category
News