Returning with its third annual installment and most ambitious line up to date, today GRAIN ZINE announce the line up for Against The GRAIN Festival 2018. The bill is filled to the brim with Australia’s most exciting established and up-and-coming talent including City Calm Down, Tiny Little Houses, Maddy Jane and more.

Saturday, November 3, 2018 will see 20 interstate and local artists will perform across three of Brisbane’s favourite venues; The Foundry, The Brightside and The Valley Drive-In (The Brightside car-park).

City Calm Down will close out the festival, fresh off their national tour in support of their recent album Echoes In Blue. Melbourne based four-piece Totally Mild will be there to perform cuts off their new record Her, which was named among Noisey’s 2018’s Essential Albums. Tiny Little Houses promise to rip through Fortitude Valley with their ironic lyrical observations after sold out shows across the country with Hockey Dad. Brisbane will be well represented, too with appearances from local legends Good Boy, First Beige, Bloom Parade, sweater curse, Start Together, Concrete Surfers, Sleepclub, Pool Shop and Blonde Tongues.

This year’s festival backs up a huge 2017, which saw Gold Class, The Courtney’s (CAN), Mossy, Stella Donnelly and Horror My Friend perform and garnered a nod from the National Live Music Awards, with Against The GRAIN Festival being nominated in the ‘Live Event of the Year’ category.

Since it’s inception in 2015 the publication has grown past its journalistic roots into a taste making pillar of the Brisbane music community; incorporating branded events into the GRAIN cache. Including monthly club nights at The Foundry, with Phantastic Ferniture headlining the most recent installment.

THE BRIGHTSIDE | THE FOUNDRY | THE VALLEY DRIVE IN 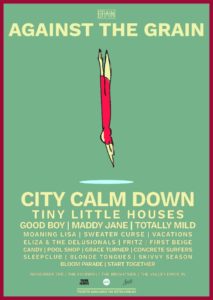