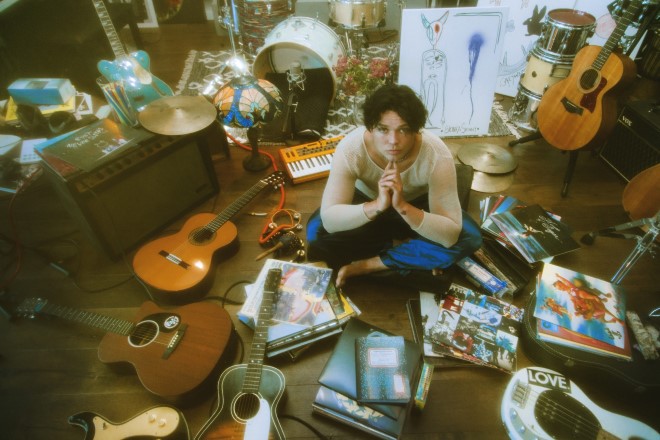 Listen to the album here
It was back at the beginning of lockdown in February 2020 as Ashton saw his touring schedule empty and no recording planned with his band 5SOS (5 Seconds of Summer) that the spark to make a solo album was lit.

Created from start to finish, solely in his LA home with producer housemate Matt Pauling, ‘Superbloom’ is the result of his continued artistic advancement. Irwin had always had it in his mind that one day he would make a solo album and now the opportunity presented itself. This was a chance for the 26-year-old to make a record that combined sounds drawing from the broad collection of artists he loved – including but not limited to Foo Fighters, Nick Drake, Helmet, Silverchair, Stone Temple Pilots, My Bloody Valentine, & Curve – with lyrics that touched on every aspect of his life. It’s filled with the poignant, profound songwriting that only comes about from an artist fully handing himself over.

These are songs about Ashton’s childhood, about alcoholism, depression, body dysmorphia, death, addiction, despair and hope. “I had to reach a certain level of lyrical maturity in order to write about something I actually cared about. I think it’s always important as an artist to have a mission statement, like, ‘why do you make music? Why do you write the lyrics you write?’.”

Each song feels like a fresh leap into a deep theme and new sonic palette, all the tracks belonging together at the same time and standing as singular statements. ‘Greyhound’ pulls at the thread of the greyhound racing industry and all its horrors and ends up reflecting on the rat race of modern life and how the working classes are being hammered into a routine of work, work, work. That it does this, whilst sounding like a euphoric mix of Soundgarden and Tears For Fears, only adds to Superbloom’s fist-clenching sense of purpose.

The captivating, dusty acoustic balled ‘Matter of Time’ captures the slow battle of sobriety. “I’ve been sober for a year and three months but fuck me it’s so thirsty at times. Matter of Time is about weakening the darkness that comes into your life.” The baroque strings of ‘Sunshine’ peer into the corruption and deception of the US media and the sweeping heavy-rock licks of ‘The Sweetness’ see Irwin revisit one of the most harrowing episodes of his life. “A couple of years back, I finally decided to get treatment for anxiety and depression. I was pretty much on the verge of killing myself. I just need to free myself from that fear.” The song recounts the emotional states Irwin went through as part of his recovery.

‘I’m to Blame’ is a stomping salute to iconic rock ‘n roll tracks of the past, recounting the cosmic enlightenment that comes from late-night conversations with friends, and ‘Drive’s pulsing, shimmering pop delicately weaves through the turmoil of bereavement. After a record that has shone a light into all the corners of Ashton Irwin’s life, it makes sense that it concludes with a song about his career as a pop star. The snarling minor-chord electro-pop of ‘Perfect Lie’ is about singing songs you don’t believe in. “I’ve been a fucking meat puppet at some points in my life,” he says. “I’m so grateful for everything I’ve been through but sometimes you’re just not feeling the things you’re saying as a performer. I think it’s cool to write about that too. It’s about growing out of songs you’ve written in the past.”

For an artist who has predominantly worked within the collaborative dynamic of a band, this was a chance to go off-grid. “It was really freeing and inspiring to me,” he says. “The journey I was intending was growth, self-understanding, self-reliance when it comes to song-writing and production. The songs I’ve written for this record couldn’t be sung by anyone else but me.”

A testament to their deeply rooted bond, 5SOS have wholeheartedly supported and encouraged Ashton through the recording process of ‘Superboom’, with understanding and respect that the nature of these songs could be told only by Ashton himself.

It was this reassurance of the band’s loyalty to one another that allowed Ashton to create a record from its very genesis right through to its conclusion, throwing himself into it both practically and emotionally. The result, a deeply personal, evocative and uncompromising record from an artist poised and ready to tell their story.