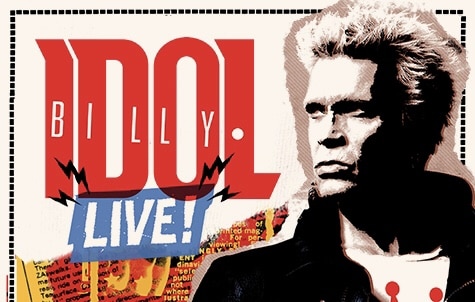 ‘White Wedding’, ‘Dancing With Myself’, ‘Rebel Yell’, ‘Mony Mony’, ‘Eyes Without A Face’, ‘Flesh For Fantasy’.… He’s a punk rock superstar and multi-Grammy nominee, his place in rock & roll history one of legend. The one and only Billy Idol hits Australia this month for his first live shows since 2015!

Now, the iconic singer has announced he’ll raise much-needed funds for charities battling the fire crisis as part of his upcoming visit, which sees Idol return to Melbourne, Brisbane and Sydney for three headline dates with his full band, including legendary lead-guitarist Steve Stevens. Tickets to all shows are on sale now.

Last night, Idol revealed fans had the chance to bid on special Meet & Greet packages in Brisbane and Sydney to help raise funds. A message on his website reads:

“Like you, I’ve been watching the terrible fires in Australia with great concern. The damage to humans and wildlife alike thus far has been devastating and as we prepare to come to play in Australia and New Zealand in the coming days our thoughts are with those dealing with the ongoing crisis.

To help support fire relief efforts in Australia I’m honoured to do the following to help the cause. All funds raised will be donated to Rural Aid Australia (www.ruralaid.org.au) and Animals Australia (www.animals australia.org).

I’m going to auction off two Meet & Greet packages in Sydney and Brisbane. Auction list below:

Idol is also giving emergency personnel the chance to score free tickets to both shows.

“A limited number of free tickets will be made available to the Sydney and Brisbane shows for Australian first responders and other emergency personnel who have been battling the crisis. Those interested in requesting free tickets should make a request by email to billyidol.net@gmail.com. Specific details are available at BillyIdol.net.”

Lastly, Idol also announced he’ll donate a portion of merchandise sales from his Sydney and Brisbane shows to fire relief efforts to the above charities, with that donation portion matched by Frontier Touring and venues Riverstage (Brisbane) and Hordern Pavilion (Sydney).