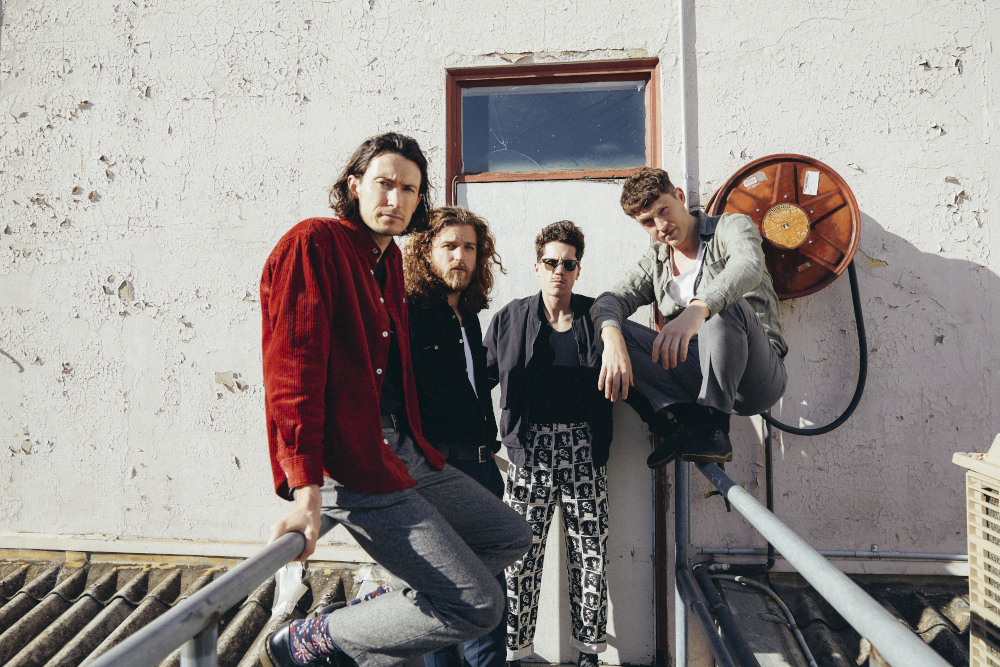 Recorded with producer Burke Reid (Courtney Barnett, The Drones, Julia Jacklin), ‘Television’ is a prescient pop anthem for our times, and the band’s first new material since 2018’s masterful Echoes In Blue. That record debuted at #20 on ARIA Album Charts and #6 on iTunes, earning wide critical acclaim at home and abroad, with NME hailing the band’s “undeniable ambition”.

Now, that same spirit and drive finds City Calm Down hungrier than ever and determined to not repeat themselves on their upcoming third album, due out this year.

In celebration of their new single, City Calm Down will be performing two exclusive headine shows in May/June, and returning to the UK/Europe in Sept/Oct. Tickets are on sale now via www.citycalmdown.com – dates below.

‘Television’ is inspired by 1976’s Sidney Lumet-directed satire Network – an Oscar-winning howl of protest. Four decades on, Network’s bleak vision is more relevant than ever.

“Network is a dark satire about an anchorman who goes on a series of rants live on air after he loses his wife and finds out he’ll be fired,” says frontman Jack Bourke, who borrowed from the film’s infamous media monologues for the song’s intro. “Even though it was released 40+ years ago, it feels more relevant than ever in the 24 hour news cycle world we live in. It was serendipitous I stumbled across it the night I wrote ‘Television’.

“Although the lyrics touch on the same broad themes as Network, I’m not as deeply cynical about the impact of media in our lives. One of the greatest opportunities we have is to engage with the abundance of outstanding art that’s being produced. At the same time, there’s a lot of absolute crap, whether for television or other media, and it gets a lot more attention than it deserves. Culturally, this dulls our senses to what’s true and beautiful and we risk becoming more shallow and insular as a result.

“At the end of the day it’s a pop song and you can take as much or as little of that as you like. Musically it nods to and steals from T.Rex, The Smiths, The Clash and The Replacements and we’re fucking excited to put it out!”

Two albums and one EP in, City Calm Down’s accomplished songwriting has earned over 12 million streams on Spotify to date. Championed by triple j – including a Like A Version (465k on YouTube) – and community radio, the band’s ambitions have seen spins on Radio 1 (Huw Stephens) and BBC 6 Music, plus press coverage from NME, Rolling Stone, The 405, Stereogum, Consequence Of Sound, Indie Shuffle, Clash, The Independent, and more.

The list of earlier singles is impressive: ‘Son’, ‘Rabbit Run’, ‘Wandering’, ‘Your Fix’, ‘Border On Control’ – from 2015’s assured debut In A Restless House – and ‘Blood’, ‘Joan, I’m Disappearing’, ‘In This Modern Land’, ‘Pride’, ‘Distraction/Losing Sleep’, lifted from 2018’s unflinching Echoes In Blue. That record saw CCD sell out multiple headline tours, including 2,000 capacity venues such as the Forum Theatre (Melbourne) and Metro Theatre (Sydney). Festival history includes: Splendour In The Grass, Laneway, The Great Escape, Gold Sounds, Falls, Sugar Mountain, Beyond The Valley, Yours & Owls and more.

With ‘Television’, the band re-emerge with a brand new statement of intent and confidence. Stay tuned for more to come in 2019 from City Calm Down!
CITY CALM DOWN
With special guests Merpire (Melb) & Grace Turner (Syd)
Presented by I OH YOU and Collective Artists
On sale now via citycalmdown.com
Saturday 18 May
Howler | Melbourne, VIC
18+
moshtix.com