With five more sleeps until Soothsayer and I OH YOU join hands and transform the hallowed inner-city grounds of RMIT this Saturday for City Loop, it’s time to start planning your day. We’re thrilled to release the set times and the food and bev line up accompanying the inspired and forward-thinking line up featuring the likes of CC:DISCO!, Cut Copy (DJ set), Kllo, Channel Tres and many more.

There are still a handful of tickets available via Moshtix, so grab yours while you still can! Come get lost and found again at City Loop.

Check out set times below: 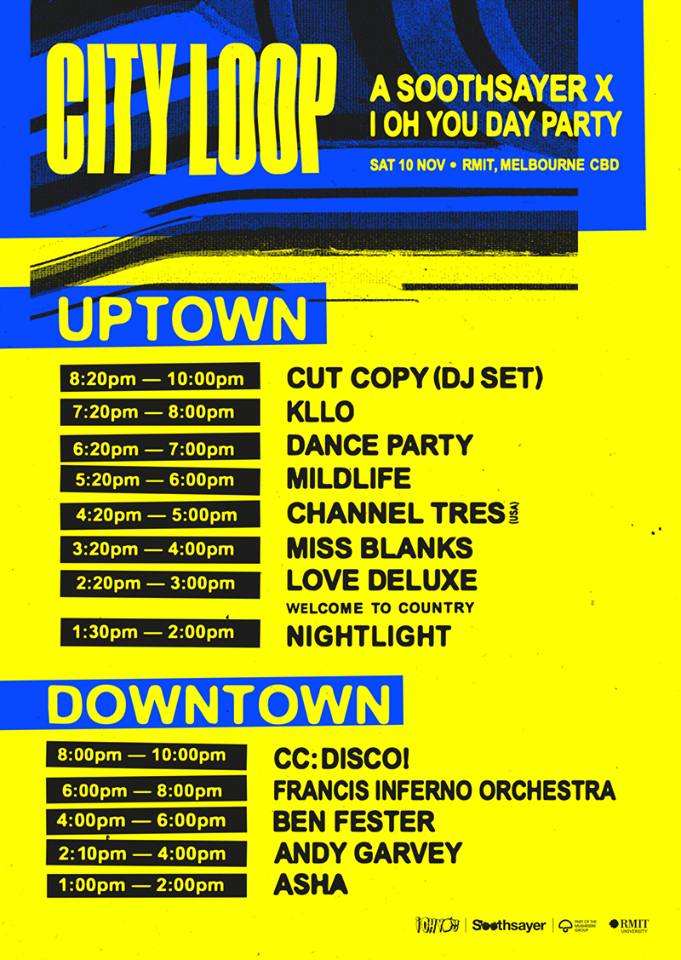 Andy Garvey
An electronic music specialist at FBi Radio, Andy Garvey is the voice of weekly radio show Pure Space + triple j’s Saturday night Mix Up. With an ear finely tuned to the workings of the diverse local and international dance music community, Andy introduces some of the world’s most interesting electronic acts to Australia’s airwaves. Off air Andy continues to light the fire under packed club floors around Australia with her eclectic mix of carefully curated tracks having recently warmed floors for Julio Bashmore, Kornel Kovacs, Mall Grab and Cyril Hahn among others.

Channel Tres
Channel Tres – the latest signing to GODMODE (Yaeji, Shamir) has unleashed his single and video Controller. Featured in Complex’s ‘Best New Artists of the Month,’ Controller was named as an ‘Essential New Tune,’ by BBC Radio 1’s Pete Tong, and has received support from Annie Mac, Toddla T, Phil Taggart, Tom Ravenscroft and Jaymz Supernova in addition to NPR. ‘Controller’ and follow up single ‘Jet Black’ feature on Channel Tres’ self-titled debut EP which is out now!

Cut Copy (DJ Set)
DJing has always been an essential part of Cut Copy’s career. Dan Whitford began his career as a hip-hop scratch DJ. The band have moved on to DJing globally as a main stage attraction on both rock and dance festivals, as well as superclubs, underground dance parties and fashion events. DJing is a source of inspiration to Whitford and Hoey, generating both song and remix ideas for the band. It is an opportunity to get close to their fans, a way to have fun, and spread fun. Cut Copy DJ sets are a mix of cutting-edge dance music and classic rock, pop and disco, all expertly mixed together. Anything goes. Dan will be spinning tunes at City Loop.

Dance Party
Australia’s most notorious controlled burn specialists, Dance Party blend disco and
house into non-stop, well-above-boiling-point live shows. It’s an 11-piece disco band performing songs you know and love, deep cuts you’ve never heard of and original disco, including their first ever recorded original track ‘All My Love’ which dropped today! Known to most metropolitan fire brigades as the high energy fire wardens of the infamous ‘Dance Party: Disco Inferno’ party series, this group of devoted musicians and performers have created something truly unique within the Melbourne party scene.

Francis Inferno Orchestra
Melbourne has emerged over the last half decade as a one of the most exciting
destinations for underground music. Francis Inferno Orchestra is among the most
esteemed talents to emerge from Australia’s creative capital. His wonky discofied yet
off kilter, house sound which has one step in the past and one toward the future, has
also permeated the Superconscious label he runs alongside Fantastic Man. A label
which champions Australian music and beyond and already in its youthful lifespan
become a ‘one to watch’ in the underground scene.

Kllo
First emerging in 2014, Kllo’s (the project of Melbourne cousins Chloe Kaul and Simon Lam) progression culminated in the release of their heavily-celebrated debut album Backwater late last year. The record saw rave reviews globally, with their blend of R&B, UK garage, and 2-step resulting in a wave of new supporters. The duo has built a strong name for themselves both abroad – playing to sold-out crowds across North America, Europe and a recently announced debut Asian tour – and locally, having appeared at festivals such as Laneway, Splendour in The Grass and Pitch Festival. 2018 has seen the release of the Pitchfork-approved single ‘Potential’, a track that represents the sound of Kllo in the present.

Love Deluxe
Love Deluxe found a home for his music within the burgeoning Australian label Soothsayer, and channelled his heart, sweat and funk into his musical offerings. Written, produced and recorded by the man himself, Love Deluxe’s songs are a luscious cocktail of the producer’s world through rose-tinted glasses. Numbers like ‘Cool Breeze Over The Mountains’ and the title track float through space and time with a hypnotising blend of funk and disco, while‘Spice of Life’ is at its core is a sauntering poolside anthem with its shimmering saxophones and sweaty guitar licks. After seeing a packed out dust pit at this year’s Sugar Mountain, just try and stand still during one of Love Deluxe’s sets!

Mildlife
Mildlife take the musical canvas, rip the lids off the paint tins, and throw vibrant slashes of colour into kaleidoscopic jams. The four-piece bonded over the desire to push musical boundaries on record, and developed a tight live shows bolstered by wild improvisation. The bands debut Phase, released earlier this year, mines jazz, psych and disco for its irresistible groove. The album has been praised by the likes of Gilles Peterson, Mount Kimbie and The Guardian, whilst receiving various accolades from radio stations around the world. Listen to ‘The Magnificent Moon’ here.

Miss Blanks
Miss Blanks has quickly established herself as one of the most important new voices among the Australian music landscape. With fire music, hot style, and a stage presence like no other, she is blowing up the scene in a way that’s too loud for people to ignore. With explosive early singles, ‘Clap Clap’ & ‘Haters feat. Aywin’, she flexed hard and saw the industry clamber to celebrate this powerful musical force from Brisbane. Her debut EPDiary Of A Thotaholic sent her trajectory even higher. Hers is a message of  confidence, sexuality, positivity and empowerment. With support from triple j, Complex, i-D/Vice, Billboard, Rolling Stone, Redbull, Acclaim and an ever-growing fanbase, she is not to be missed or messed with.