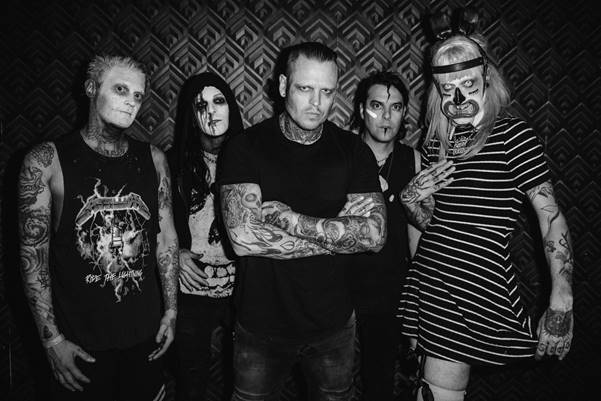 Andy LaPlagua and his band of miscreants, COMBICHRIST have redefined the sound of modern industrial music and they will be bringing their uncompromising blend of vocal aggression, metal guitar filth and brutal synth manipulation to Australian fans this October.

COMBICHRIST took founder Andy LaPlegua’s hardcore past and electronica present and merged them into a singular, mechanical music monster and mastermind Andy LaPlegua says: “Welcome to the birth, growth, death, and rebirth of a band. COMBICHRIST has become a purely visceral creature, driven by instinct and emotion; stripped of all pretension. It’s raw and uncompromising – it’s fueled by expressions of lust, anger, pain and hate. The never-ending evolution of a sound has finally come full circle. It’s time to feed our demons. It’s been way too long since we visited the roots of this band, and we are injecting it with the future!”

Over the years COMBICHRIST have evolved beyond the demon it was into an unrelenting, malevolent force in music. It’s been 8 long years for COMBICHRIST fans to get to witness their visceral live show and as The Void Report so aptly put it “there’s just not enough bands who bring so much pure entertainment, electronic mastery and nightmarish theatrics to their shows. But we’ve got Combichrist. – The Void Report

DARKCELL is the dark horse of the Australian music scene. Having released a critically acclaimed fourth album this year, the Brisbane quartet of black sheep continue to thrive, delivering explosive shows that have solidified their place in the industrial metal scene. Boasting many successful headline tours, festival appearances and tour support for the likes of Motionless in White, Wednesday 13 and Combichrist, DARKCELL are truly an Industrial stadium rock powerhouse not to be missed.

Tickets on sale Wednesday 29 May @ 9am local via destroyalllines.com