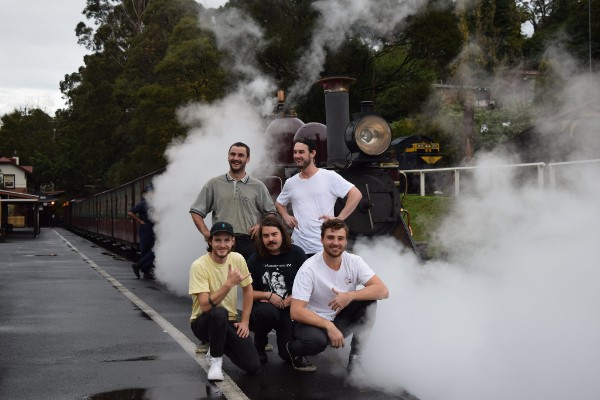 Getting on the diet train isn’t easy but DIET are certainly making a good go of it. Just check out their press pic as evidence. The beloved Melbourne five piece proudly today announce the release of their new EP Sundown in late August – right before showcasing at Brisbane’s BIGSOUND.

To celebrate the release, these five best mates have added a bunch of extra East Coast dates in August and September which will wrap up at ‘Hills City’ alongside The Bennies, BATTS and more. Plus they were just announced for NYE On The Hill this week.

DIET formed over a love of all things Captured Tracks Records in a ramshackle share house at the end of the Northern line of The Tube in London. There was a Smiths poster on the wall which may have something to do with triple j presenters describing their knack for nostalgic synthesizers and playful guitar lines as “shimmering with the sound from an alternate universe where Morrissey grew up beside the beach.”

Following the release of their debut EP and sold out shows, DIET bunkered down with local producer Dan ‘Caz’ Caswell to create a wave of new material. The result is their Sundown EP, a collection of tracks that shine like a Brit-pop laden sunset – the first single, jangly ‘Take Me’ gained the band spot rotation on triple j. Next came an ode to bass player Carlos Tinsey’s brother, ‘Danny Boy’ in early 2018 and there’s another surprise video in the works for a final single very soon. Recorded in Caz’s studio the Alamo over the last twelve months as well as few final touches at Red Door Studios in Collingwood, Sundown is proudly homegrown.

Recently scoring a place on the New World Artists booking roster DIET wrapped a huge run of shows alongside Polish Club and West Thebarton across the East Coast – adding to their already extensive supporting roster which includes Slum Sociable and Alex Lahey. Most recently the band fronted a national support spot for British India and played Cherry Rock Festival alongside Cosmic Psychos, The Chats and Gabriella Cohen.

Described by Tone Deaf as “one of the tightest and most entertaining live bands you’ll find”, DIET bring their infectious live show to somewhere near you this August and September. Don’t miss them promote their new release on the road for some calorie crunching’ fun.

Sundown EP is out everywhere from Friday August 24.