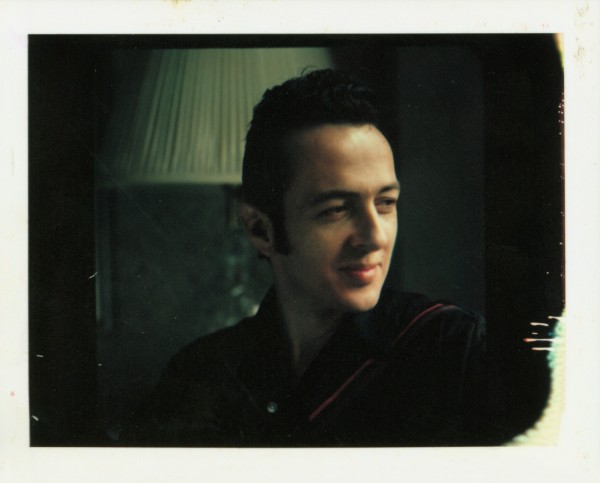 ‘Joe Strummer 001′ will be released on 28th September on the following formats:

All the formats include tracks that have never appeared anywhere before as well as new remasters. Exclusive to all formats is an album of unreleased material including an early demo of ‘This Is England’ entitled ‘Czechoslovak Song/Where Is England,’ a solo demo of ‘Letsagetabitarockin’ recorded in Elgin Avenue in 1975, outtakes from ‘Sid & Nancy’ featuring Mick Jones and unreleased songs ‘Rose Of Erin’, the biographical and mythical recording ‘The Cool Impossible’ and ‘London Is Burning’ one of the last songs Joe recorded.

Punk pioneer, singer, songwriter, recording artist, activist, musical and political inspiration for a generation and mighty diamond Joe Strummer was the most charismatic and passionate front man to emerge from the punk explosion of the late seventies.

After Joe’s untimely death in December 2002 it was discovered that he had been quite an archivist of his own work, having barns full of writings and tapes stored in his back garden. There are now over 20,000 items in the Joe Strummer Archive.

The archiving of this material and compiling of ‘Joe Strummer 001’ was overseen by Joe’s widow Lucinda Tait and compilation producer Robert Gordon McHarg III.

All tracks were restored and mastered by Grammy Award winner Peter J. Moore at the E. Room in Toronto Canada. On going through cassettes and recording tapes it was discovered that Joe was rather frugal and keen on hiding tracks. On cassettes he would leave 20 minutes between songs. On the 1” 8 track recordings it was discovered there were hidden tracks superimposed onto each other. For example tracks 1-4 were taken by one song and tracks 5-8 by two other songs which were thought when played back to be caused by tape denigration until the tapes went to Peter J Moore who was able to separate one song from another.

The box set has the same content as the CD set and is pressed on audiophile quality 180g vinyl. The box set’s accompanying hard backed book also included in the Deluxe CD features rarely seen and previously unpublished memorabilia from Joe’s personal collection as well as historical press reviews and technical notes about the albums. The slipcase cover of all formats is taken from Joe’s 1990 Californian driving license.

Art directed and designed by Robert Gordon McHarg III who previously worked on the Clash ‘Sound System’ box set with Paul Simonon, the John Cooper Clarke compilation ‘Anthologia’ and curated the Black Market Clash Exhibition. Gordon says, “The idea behind the 64 page A4 notebook is that it’s done as if Joe had designed it himself, telling his story, an insight into his workings including hand written lyrics with personal notes and scribbles.”