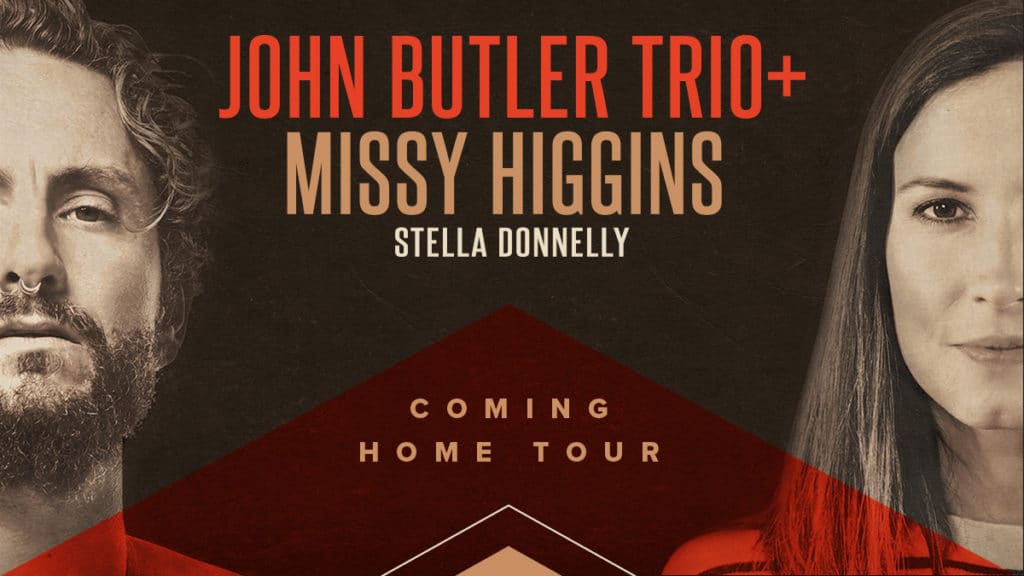 Frontier Touring are beyond excited to reveal that Aussie music icons John Butler Trio and Missy Higgins will be joining forces in January and February for the Coming Home Tour. The tour’s name reflects both the title of John’s imminent new album and the fact that it will finally reunite two artists whose early careers were closely intertwined.

Missy was supporting John at Sydney’s Hordern Pavilion the night that her debut hit‘Scar’went to #1, and a few months later they were pivotal early drivers of the Wave Aid tsunami benefit show at the SCG. They won their first ARIA Awards as Best Male and Best Female artists in 2004 and 2005 respectively, and even shared their first Rolling Stone cover together. Since those days, John and Missy have become Australian musical icons, performing at numerous benefit gigs together and standing side-by-side in several environmental campaigns, but this will be their first national tour together in nearly 15 years.

John Butler Trio’s first album in four years, HOME, is out in just two weeks’ time (28 Sep through Jarrah Records), and will be brought to life across some of Australia’s most celebrated venues like the Sydney Opera House Forecourt and the Sidney Myer Music Bowl.

It will be coupled with the hits that have made him the highest-selling independent artist of all time, such as ‘Zebra’, ‘Better Than’, and ‘Ocean’. Fans will hear the head-turning first single from the record, also titled ‘Home’, as well as brand new single ‘Just Call’, released today with a stunning video that adds clarity to the puzzle revealed with HOME.
“‘Just Call’ is an earnest love song I’ve had for 13 years which I was finally able to finish in these sessions. This is the story of how I found my best friend and partner, out in a small town in the middle of nowhere, in a world of 7 billion people,” said John Butler.

The album takes listeners through an emotional sonic landscape, mirroring the frustrations, vulnerabilities, joys and tensions of modern life that have shaped the last four years for John Butler.
“What you’re hearing is the destination, but getting here felt like an odyssey; some rite of passage that I couldn’t go around, couldn’t go over, and couldn’t go under, I had to go through. This album is my most personal work yet and it feels like taking it on the road to connect with fans directly is the final act of delivering this body of work.

“This album touches on the anxieties and demons I’ve been grappling with since the last album, but it’s also full of joy, hope and redemption, and I’m looking forward to conveying the stories and passion of all of this journey one on one live with fans.”
John Butler Trio has expanded to a five piece band for the duration of the Coming HomeTour, hence the name JBT+, taking the John Butler Trio live experience to a whole new level.

After the top 5 success of her recent album Solastalgia (out now through EMI) and the birth of a baby girl just last month, Missy Higgins will bring her stunning new material to the stage alongside her long time musical compadre John and his new five piece band. She’ll of course be bringing the classics too – the songs that have sold more than a million albums in Australia alone, earned her 23 ARIA Award nominations, and seen her support superstar Ed Sheeran on his recent stadium tour.
“It will be so good to get out of the house and get back on the road alongside John and his band”, said Missy. “I have great memories of all those gigs I did with him when I was first starting out and it will be great to play some really special venues together again after all these years.”
Rising star Stella Donnelly will join John Butler and Missy Higgins at all shows (except Margaret River and Albany). Seemingly coming out of nowhere with her powerful debut EPThrush Metal, she has instantly becoming one of Australia’s most talked about new acts. Her lo-fi folk-pop is laced with quick wit, savage social commentary and feminist defiance, with songs like  catapulting the singer onto stages across Australia and the world.

Baker Boy will also perform at the final show of the tour in Hobart. Another artist bursting on the scene in a meteoric fashion, the NT rapper responsible for  is quickly proving why he holds a one-way ticket to hip-hop stardom. Rapping exuberantly in Yolngu Matha and English, as well showcasing his other talents as a dancer, his live shows are packed with unbridled energy and passion.

Together, Missy Higgins and John Butler have created the soundtracks to countless lives as two of Australia’s most treasured singer-songwriters. Don’t miss this incredible opportunity to witness them both live and in full effect, reunited once more to tour the country for a once-in-a-lifetime show.