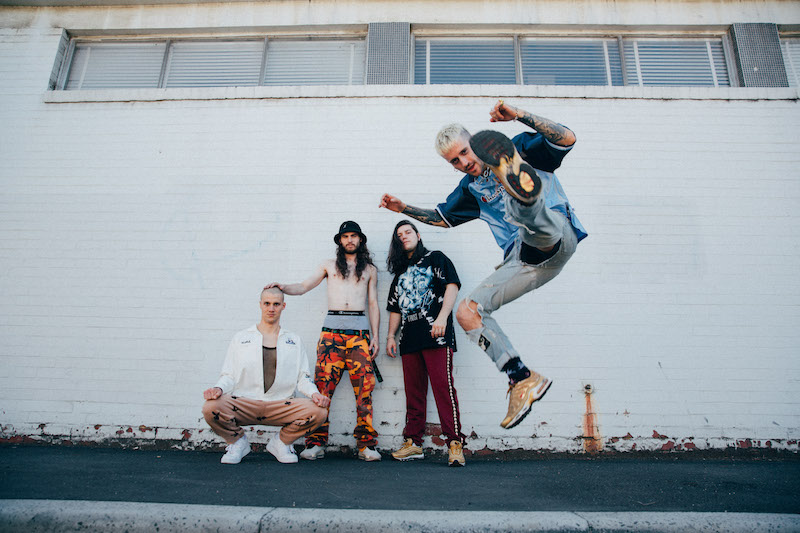 Ocean Grove have today opened a new chapter with the release of the audiovisual delight that is ‘Ask For The Anthem’. The collective have also revealed Twiggy Hunter as their new bass player, with Dale Tanner becoming full-time frontman of the group. The track had its world premiere on triple j’s Good Nights earlier this week.

The video, directed and edited by the band’s longtime collaborator Thomas Elliott, features Ocean Grove at their quirky and creative best. “We pushed our own limits of experimentation on this track,” says Dale. “It is by far the most time and energy we have invested into any one song. Just so you know, this is not a song about being cool and getting the girl. Look closer.”

The release of ‘Ask For The Anthem’, produced by drummer Sam Bassal and co-written with studio member Running Touch, comes shortly after the band’s final performance with former members Luke Holmes and Jimmy Hall, who departed in style with a fire-filled set at UNIFY Gathering in January.

Hailing from Melbourne, Ocean Grove have quickly ascended to the top of Australia’s heavy music scene in recent years, with their debut album ‘The Rhapsody Tapes’ in 2017 debuting at #5 on the ARIA charts and landing triple j feature album prior to its release. The group have toured globally with the likes of Limp Bizkit, Northlane, and Crossfaith, as well as mainstage festival appearances at Splendour In The Grass and Australia’s inaugural Download Festival, and show no signs of slowing down in 2019.

Fans can catch this rejuvenated OG lineup on tour with UNFD labelmates Hands Like Houses throughout February, where they will be debuting ‘Ask For The Anthem’ on the live stage. What can fans expect? “Four freaks up on stage, delivering raw and untamed realness and an OG show even we have never experienced before.”