Described as “your favourite new rapper” by NME,Rejjie Snow has today announced his forthcoming second album Baw Baw Black Sheep out July 9via BMG AUS.To coincide with the announcement,Rejjie has unveiled a brand-new video for latest single ‘Relax’.

Shot by collaborator Matter Research in Egypt,the result is a visual that finds Rejjie with a surreal level of casualness, having just rolled out of bed next to the Great Pyramid of Giza.Check out the clip for ‘Relax’ here Baw Baw Black Sheep shows off the Irish rapper’s hyper-visual world-building capabilities as he creates a cinematic soundtrack full of colour and joy working alongside Cam O’bi(Executive Producer) and frequent collaborator Dee Lilly.

“I approached [the album] light heartedly from the point of view of making a short film through music,” Rejjie explains.“I always loved Willy Wonka & the Chocolate Factory. I watch it all the time. I thought of Baw Baw Black Sheep like a soundtrack to it. I put the movie on with my album, and they synced up perfectly. I tried to tap into all of these feelings. The music is really colourful, and the lyrics are often happy, because that was my state of mind.”

Originally hailing from Dublin,Rejjiefelt he always stood out. Beyond the fact he rappedin a country that lacked a vibrant hip hop scene, he never quite fit in with his friends and family either. “I’m still the one who’s a bit goofy and different from everybody else,” he affirms. “People always said I was odd, so I turned into the ‘Black Sheep’. I use those differences to my advantage though. Things like my ADHD became superpowers, not weaknesses.” Those “superpowers” separated him from the pack right out of the gate.

He supported Madonna on tour and broke all the rules with his 2017 mixtape,The Moon & You. A year later, his full-length debut, Dear Annie,yielded genre-disruptive fan favorites such as ‘Egyptian Luvr’, ‘23’, ‘The Rain’, and more.

Dear Annie was a roaring success receiving rave reviews and took the rapper to the global stage selling out shows.Never one to shy away from collaborations,Rejjieset the stage for Baw Baw Black Sheep releasing ‘Cookie Chips’, which features the late and legendary MF DOOM, followed by single ‘Mirrors’with Snoh Aalegra which pairs sun-soaked production with laid back bars before Snoh turns up with slick and soulful cameo on the chorus.

“It’s very nostalgic,” Rejjie elaborates. “I’m diving into little things that stood out from when I was younger. They’re tiny snapshots. I’m trying to paint a story with the lyrics. It’s got a happy vibe.” The album also features the languorous vocals of Tinashe and groupt herapy. for the sultry ‘Disco Pantz’. Elsewherea trap bounce underscores the chilled-out energy of ‘Relax’ also with collaboration from group therapy.before a moment of intimate dialogue.

Cymbals simmer beneath tense verses on the double entendre-driven hook of ‘Oreos’. On the finale ‘Shooting Star’, a frenetic beat darts across the sky as his vocals soar amidst spacey zips and bleeps. “Everyone is a star in their own way,” he states. “I’m touching on this idea and trying to inspire on the last track.”

The bliss that Rejjiefelt in that moment courses through the entire body of work. “I felt very at ease,” he says.“There was nothing heavy on my mind. Everything made sense. I’ve never been that quick with music in the past. It just flowed out of me. I had done a lot of shrooms two months before, so I was prepared for the journey of making Baw Baw Black Sheep. I went out there by myself with no distractions. It was a special time for me. When I made ‘Dear Annie’, I was coming out of a relationship, and I didn’t know whether or not I wanted to write about it. It was on my mind, because I’m like any other bloke. This time, I went in with nothing. I was in a good space.” In the end, Baw Baw Black Sheep might just be the answer to the escapism you’ve been needing. “I’d love for you to experience this the same way you’d watch a movie,” he leaves off. “Hopefully, you’re immersed in it. I also want everyone to know—especially people from my neck of the woods—that you can do the same thing. It’s really crazy what you can make when you’re having fun.” 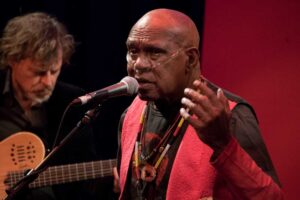