News: SAHARA BECK IS VIBRANT, COLOURFUL AND MANIC IN HER NEW VIDEO FOR ‘QUEEN OF HEARTS

HomeNewsNews: SAHARA BECK IS VIBRANT, COLOURFUL AND MANIC IN HER NEW VIDEO FOR ‘QUEEN OF HEARTS
News 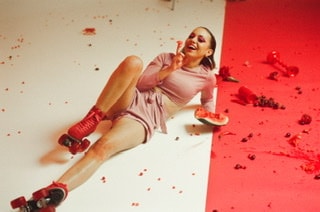 Brisbane bombshell Sahara Beck is back with a stunning new video for her latest single, ‘Queen of Hearts.’
The video, directed and produced by creative collective Method To My Madness, captures Beck in vibrant, colourful and manic
scenes, adding brilliant visuals to the flashy new single.
The video, which premiered this morning via Fashion Journal, sees three different characters burst from Beck’s ‘Queen of Hearts’
persona. Yellow Sahara and Pink Sahara are conflicting personalities. Yellow is the drill ‘Sergeant of Life’ – always looking
towards the future, hardworking and constantly striving for perfection. On the other side we have Pink – lazy, perfect at pleasure-
seeking, and with a healthy dose of procrastination and constant self-doubt.
The third and final character is the proverbial Queen of Hearts, who controls both sides of Sahara by sabotaging, assisting and
manipulating her thoughts and actions. All three characters are brought to life with striking imagery, incorporating brilliant block
colours, ’70s motifs, and surreal vibes that suit Beck’s explosive vocal performance on the single.

“The ‘Queen of hearts’ film clip expresses the inner battle we face when our identity begins to manipulate the conflicting sides of
our personality,” says the MTMM’s Natalie Sim (Director). “When love disrupts the habitual and automatic thoughts and
behaviours that define who we are, we go to war with ourselves.

Queen of Hearts’ is the title single from Sahara Beck’s latest EP, which has solidified her status as one of the most promising
emerging talents in Australian music. Produced by ARIA Award-nominated partner-in-crime Tony Buchen (Mansionair, Courtney
Barnett, Montaigne), the Queen of Hearts EP has received wide-spread praise since its October release, including from the likes
of triple j, the Sydney Morning Herald, Women In Pop and more.
Alongside ‘Queen of Hearts,’ the EP has spawned the singles ‘Don’t Overthink It,’ ‘I Haven’t Done A Thing Today’ and ‘Here We
Go Again’, which have already scored big love from triple j and community radio nationwide, as well as coveted spots on Spotify
and Apple’s new music playlists. The record is rounded out by one last track – the bright ballad record-closer, ‘21st Century.’
All this music was brought to life by Beck’s work with Buchen and honed at his Kingsized Soundlabs studio. The pair first
collaborated in 2017 and the connection was so strong, Sahara couldn’t wait to get back.
“I spent two years throwing my heart and soul into these songs and my instinct was that Tony could help me take these songs to
a place I’d only been dreaming of,” she says about her studio buddy. “I like how much he pushed me every day – more than
anyone had before – and he got me to sing in ways I didn’t know I could.”
It’s an inspiring evolution for a girl who wrote her first song at 12 and an exciting new page in a CV that already includes one
album to date, two EPs, winning a QLD Music Award (the Carol Lloyd Award for emerging Queensland female singer-
songwriters) and taking home third prize in the coveted Vanda & Young International Songwriting Competition, festival
appearances at Bluesfest, Bigsound and The Falls Music & Arts Festival, plus nationwide headlining tours and support slots with
Bishop Briggs, Kim Churchill and Paul Kelly.
It’s already an impressive list of accomplishments and one that’s bound to grow exponentially off the back of this latest record, as
Sahara Beck continues to cement herself as one of the most unique talents in Australian music and a Queen of hearts in her own right.