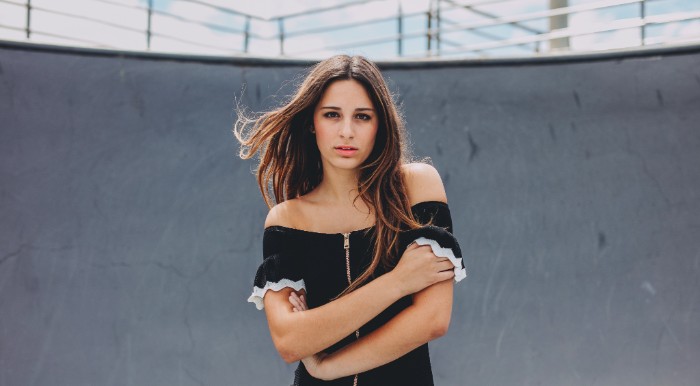 A musical force to be reckoned with, Samsaruh is today sharing the gripping new music video for her powerful new single ‘Speaking Fire’. Building on the success of her debut releases, Samsaruh’s ‘Speaking Fire’ showcases her commanding vocals with a base of striking guitars, lyrically touching on the madness of the world around us. The video shot locally in Melbourne with LP Creative, was directed by up and coming female director Pernell Marsden. The video sees Samsaruh depict different world ending characters, holding up the mirror to what is happening in the world at the moment.

The Melbourne based singer-songwriter’s debut release from 2017 ‘Golden To Thrive’ was added to high rotation on triple j and triple j unearthed as well as earning her the title of Feature Artist on triple j unearthed. The single charted in the Spotify Australia Viral Charts Top 30 as well as charting in the Shazam Top 100 Australian Chart for over six weeks, with more than 25,000 Shazams of the track. The single was widely loved by media and fans alike, helping triple j unearthed handpick Samsaruh to play their coveted Falls Festival spot in Lorne. Samsaruh’s follow up single ‘Beautiful Killer’ took it up a notch; widely loved by radio and listeners the track earnt the #1 played spot on triple j and named Samsaruh the #1 unsigned artist across the station. Samsaruh spent the second half of 2017 travelling the country in support of ARIA nominated Dean Lewis on his sold out tour and finishing the year performing at Falls Festival Lorne and NYE on the Hill.

This year she has joined Peking Duk and LANKS on their respective tours, gracing the stage at Groovin the Moo and more recently performed as a guest vocalist with Hot Dub Time Machineacross his sold out national tour. This October she’ll be heading out on her debut headline shows along the east coast, starting in Brisbane for BIGSOUND then heading to Sydney and Melbourne in October.

‘Speaking Fire’ is fierce, formidable and just a taste of what’s to come from Samsaruh.