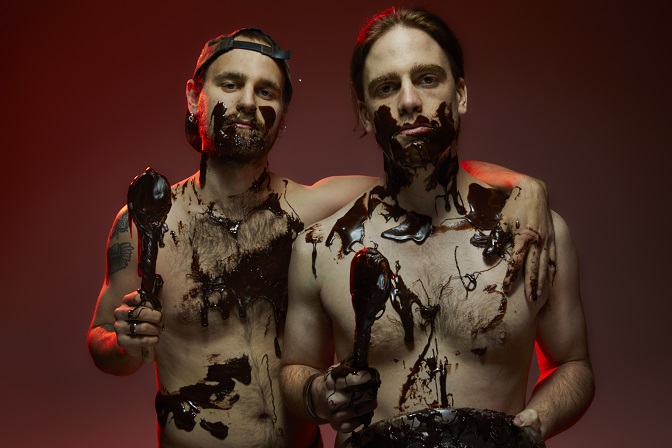 Fresh out the kitchen, Melbourne’s Sophisticated Dingo have delivered upon early expectations of brash and gnarly garage rock, with the release of their much anticipated debut EP
‘TASTES JUST LIKE THE REAL THING’.

Bristling with attitude, the record offers an insight into a musicianship that is continuing to thrive off the back of successes that followed previous single releases in ‘YUPPIES’ and ‘HEAD TALK’. Sophisticated Dingo have found their rhythm with ‘Tastes Just Like The Real Thing’; that rhythm is gritty, bustling and unashamedly brazen.

Of their new EP, Jimmy and Lew are confident that ‘Tastes Just Like the Real Thing’ is Sophisticated Dingo represented on a plate in all its finery. “‘Tastes Just Like The Real Thing’ is our entree into the dining experience we’ve always wanted to be a part of – releasing our own music. It’s a taste of the first songs we’ve written as a band and we reckon it tastes pretty much like the trashy garage tunes we aspire to write.”

Tonally, ‘Tastes Just Like The Real Thing’ plays in the same sonic environment that also seen the likes of WAAVES, The Gooch Palms and early Vasco Era shine in; the clangs of 60’s guitar melodies match perfectly with Lewis’ blistering vocals, while Jimmy proves to be a percussion powerhouse as the six-track EP hits its stride.

“Sophisticated Dingo are attacking garage pop with sheer brilliance, not to mention a touch of comedic allulre and cheeky attitude.” Happy Mag

“They belt out a hell of a sound for a two-piece, and are quickly becoming one of our favourite undiscovered rock acts in the country…” – Tone Deaf

“Plenty to like in this if you’re into your Sohos and your [The Pretty] LIttles.”
Triple J Unearthed, Dave Ruby Howe

This year has seen the band on a hectic upswing, with Australian media and radio latching on to Sophisticated Dingo’s rollicking sounds favourably, quick to land them in the same league as the likes of Violent Soho, Skegss and WAAX. ‘Tastes Just Like The Real Thing’ is a further exploration of where Jimmy and Lews’ influences have come together and fused in producing concise and punchy pieces of chaos. Come September and October, Sophisticated Dingo will be serving their menu of self-proclaimed ‘trashy garage’ goodness to crowds along the east coast; why not make your reservation now?

‘Tastes Like The Real Thing’ will be released Friday 17th August