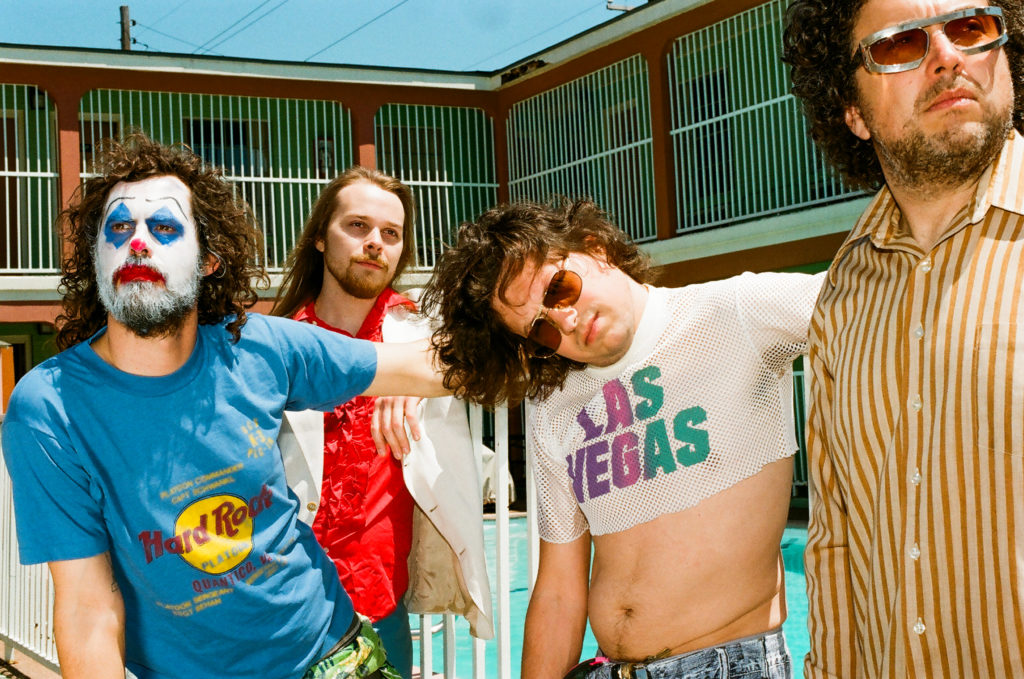 Less than a year after their critically acclaimed last album Performance, the ever-prolific White Denim are back with their eighth record Side Effects, out 29 March on City Slang via Inertia Music. Today, the band have shared the two lead singles ‘Shanalala’ and ‘NY Money’.

More in line with the experimental, freewheeling spirit of their fan-favourite record Last Day of Summer than anything else they’ve done since, Side Effects is a record that captures the essence of the band’s full-throttle live shows. Featuring a rotating cast of band members led by James Petralli and Steve Terebecki, these tracks draw on the sounds of different personnel to create a cohesive whole – the result being an album that’s as varied and vivacious as anything they’ve ever done.
‘Shanalala’
‘Shanalala’ sees them embracing a post-punk side – all stuttering, off-kilter electronics and breakneck drum machines. It’s a track that beautifully captures the playful attitude of the album – a song that shows off one of the many outfits White Denim have in their wardrobe. “Side Effects is built around this tune in some ways”, says Petralli, “I remained excited about ‘Shanalala’ so I wrote a few tunes that I thought would work with the mood and atmosphere of the track. Steve got a chuckle out of most of them and wrote great parts, then we staffed the sessions for the songs with musicians that we are inspired by. Then we dubbed and arranged the absolute shit out of them with our partner Jim Vollentine.”

Then there’s the album’s centrepiece – the six-minute odyssey ‘NY Money’. It features the backbone of the current live incarnation of the band on record (Petralli, Terebecki, Michael Hunter – Keys, Greg Clifford – Drums) and effortlessly traverses through the sounds of Soft Machine and Trans Am. “The lyrics came first. The first line was originally ‘The drugs quit smoking, I don’t find it inspiring.’ which I had written in a notebook after a night of drinking with the War on Drugs guys.” says Petralli, “they had all recently ‘quit’ cigarettes which made me suspect that they were really hanging around me so they could pinch cigs every couple of minutes. I went through two packs in three hours with them. The Neu influenced production and meandering feel of the back part of the tune is a winking homage to what they’ve been up to for the past few years.”

If you’re coming back to White Denim after a few years away, Side Effects most likely picks up exactly where you left off: a record showcasing a hugely energetic band bursting at the seams. And if you never checked out, then Side Effects is instead a wholly rewarding record – one that celebrates every form of White Denim to date and sets the stage for a brand-new chapter. White Denim bring their notorious live show to the UK for a full tour in February including a sold out show at London’s Roundhouse.