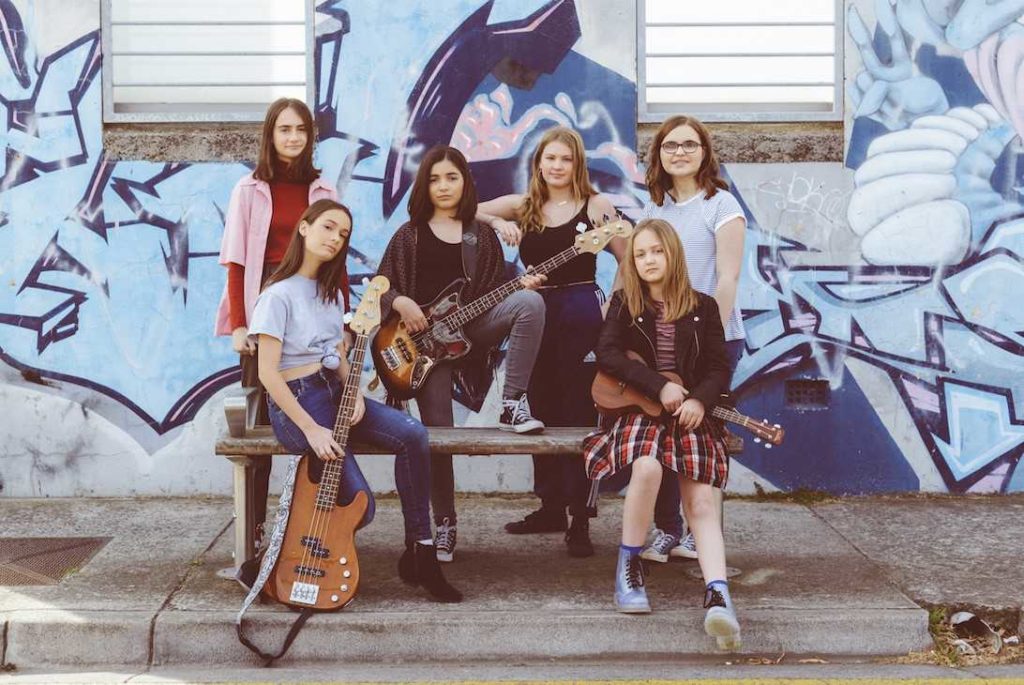 YoWo Music, the Melbourne-based contemporary music program for girls and gender non-conforming youth in high school, has today
announced their debut album entitled Work Like That, set for release on November 23. Produced with support from Creative Victoria and
Australia Council, Work Like That is a strong, heartfelt collection of songs from Melbourne’s brightest young female and GNC musicians. Work Like That is preceded by new single Built For Boys, a warm exploration of identity, out November 9. The YoWo Music performers will be celebrating the album release with an all-ages launch show at Melbourne’s iconic Evelyn Hotel on November 25.
Through guidance and mentorship from professional musicians, current YoWo Music participants and alumni teamed up to create Work

Like That, a nine-track collection of diverse and skillful songwriting and performing from these young musos. Artistic directors of YoWo Music, Lena Douglas and Claire Cross, both agree that this is a pretty special release, as Lena describes, “These are all original songs written and played by teenagers – and despite us not setting a theme for the album, all the tracks seem to have something in common; they all say something about navigating relationships and trying to find your place in the world.” From Self Love, which describes accepting one’s complexities as a person, to Suck It Up, about navigating selfishness within a ‘dysfunctional’ teenage relationship, these songs each speak honestly about feelings that most people have felt before.

Work Like That demonstrates an affection for and exploration of a number of different genres – from pop, rock, jazz, and folk. The process of creating the album from start to finish was a unique learning curve for the participants, as YoWo participant Isabella Munoz says, “This would be the first time that I’ve done something as important as this. Being able to be a musician and release an album with an amazing group of people, both those who I’ve known for a while and those who I’ve met briefly, is such a privilege. I’m so happy to be involved and to share a part of our creations.”

On top of current artist mentors Francesca Gonzales (Cousin Tony’s Brand New Firebird) and Maggie Rigby (The Maes), the YoWo team
expanded greatly this semester, as Work Like That was written and recorded over a six-month period – it was all hands on deck, as Claire
explains, “We are so lucky to have an incredible team that has worked on this album. Emah Fox worked closely with our bands and mentors in pre-production sessions to really develop the songs for recording.

Once we were in the studio, Emah continued to produce, with Anna Laverty taking on the role as producer/engineer. Anna has also done an amazing job mixing the album for us too. We have a really lovely relationship with the team at Rolling Stock Studio (Myles Mumford, Jem Savage and Tom Strode), which is where we recorded this album as well as our first YoWo EP in 2016. Myles has brilliantly mastered the album for us. We also had Hannah Reaney onboard for all of the recording sessions, beinga general legend and studio assistant. It was pretty exciting to see, at one point, about 4 female studio engineers in the same room at the same time! Having so many female role models in the same room was a fundamental aspect of this project, and I think the album and confidence of our participants has benefited hugely from this positive influence.”

Lead single Built For Boys, out November 9 and written by YoWo alumni Lily Harnath, is evocative of the DIY styling and pop songwriting of Alvvays and Japanese Breakfast, boasting driving guitar and percussion, and sweet, clever lyricism. With a heady vibe and undeniable chorushook, Built For Boys feels like a track you’d Shazam while driving along to triple j. Speaking on the inspiration behind the track, Lily says, “My song is about one of my friends trying to find her identity, but I also think it relates to most people’s search for where and how they belong in the world.” Built For Boys is accompanied by a beautiful clip, directed and filmed by Billy Crombie, which gives a deeper insight into the creative process behind Work Like That.

The YoWo team will celebrate the release of Work Like That with an all-ages performance at Evelyn Hotel in Melbourne on November 25,
giving audiences a chance to catch tracks from the new album live for the first time. Pumped for the gig, and with many successful YoWo
performances under her belt, Lena gives a taste of what to expect from the show, “Watching the YoWo gigs are some of the most
heartwarming experiences I’ve ever had. It’s incredibly inspiring to see young people putting themselves out there and going beyond their
comfort zone, and makes you want to do the same! Some of these kids are writing super catchy tasty pop songs – their skills might just surprise you!”