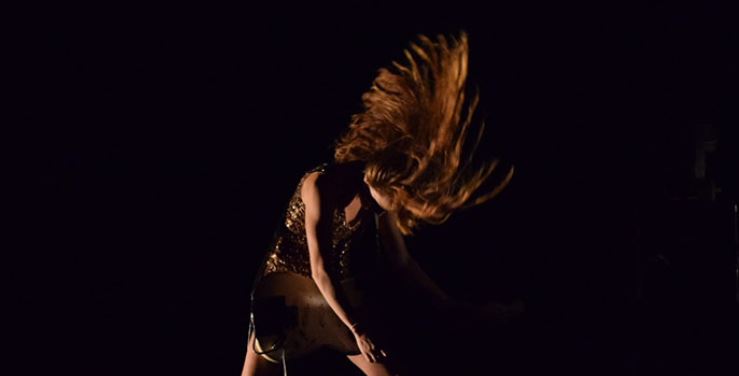 Local artists and their work are worth our time, money and admiration. Our cultural works are the beating heart of civilised society; and live performance especially can be an incredible group experience for both artist and audience. The best shows feel both personal and precious in their transience. The boundary evaporates and our journey is collective.

That’s why it is so hard to review a local show that falls so short of this target. It’s awful to watch performers working so hard but failing to convey significance.

Depthless, was created by The Farm as part of a series of six new works developed for the Judith Wright Centre of Contemporary Arts in Brisbane this year.

Depthless is performed on a bare, dark stage except for some amps, a drum kit, three guitars and a mike. Our focus has nowhere to go but to the male and female who are involved in some kind of silent metaphorical tango.

There were a few highlights; Ben Ely’s songs were sweet in their quirky realness, and one intense dance sequence between the male and female fighting for the guitar engaged; but mostly, from the moment a spotlight burned my eyeballs with every revolution, to the final sequence featuring escalating, repetitive grating guitar noise… i just wanted it to stop.

Regrettably, despite both Kate and Guy’s clear commitment to their characters and their earnest, intense performances, Depthless lacked a fresh perspective on either interpretive dance or the gender dance.

There were too many repetitive elements that should have been left at ‘workshop’ stage. Throwing a guitar so that it plays while flying, is clever, once … but gets old after the fifth throw. The bright, white revolving spotlight at eye-level was initially distracting but after several minutes became insanely annoying and pulled me out of the experience completely. This light was anything but atmospheric and should be angled away from audience eye-line or muted with a coloured gel at least.

Worth noting that the audience was split in their response. Some, like me, bemused and bewilderred, were eyebrow-raising each other in a silent “are they serious?”, and some, possibly friends or elite modern dancers, enthusiastically applauded the work.

There were soft chuckles as the pair interacted, a brief moment when Kate’s contortions went from pained to comical. Some slapstick with a hem length and a guided meditation, delivered from the sound booth, called Afterglow that invited the audience to come on stage and experience the show from the performer’s perspective.

People are essentially meaning-making machines. Our nature is to find patterns, make connections. Narrative is how we make sense of the world. However when confronted with art that makes no sense, or provides too few clues to create the connection then we either reject it or are bored. Sadly, there were times when I felt both simultaneously.

Who were these two? What is their relationship to each other? Why are they here, why are we here, what does it mean and why should we care? None of these questions were answered.

Instead we got an hour of what looked like intense but improvised dance and music that left me starving for meaning and hungry for story.

I liked where I think they were going. I reckon there’s something special about The Farm. They’re brave, committed and trying to break boundaries and meaningfully engage with audiences. They want challenge, they’re local and for all that they deserve respect.