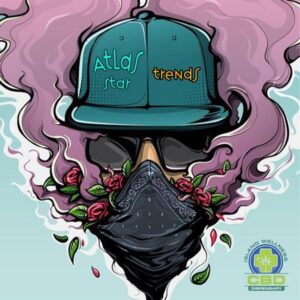 Hailing from New Haven, Connecticut  musician Atlas Star from a young age was mesmerised by the way his Uncle and friends would all jam on guitars, singing songs. This led to him writing rap lyrics and poetry when  he was fourteen and picking up a guitar for the first time at the age of sixteen.

Having previously  released three albums, his first album was recorded by OB (LL Cool J’s godson)  Side Effects.  z
The single ‘ Granted Angel‘  from the album ‘Trends”  is a single inspired by the event of  his girlfriend who was  tragically killed in a car accident on the way home from a party and was co written with Robert Burris who experienced a similar trauma.
The track opens with a melodic violin harmony, long and mournful to accompany the sorrowful lyrical styling of Atlas Star. The song reaches deep into the pain of losing someone without being able to say goodbye, and how that pain is hard to let go of, but with the hope that there is a Granted Angel to watch over him.
Christian Carrol contributes to the emotion of the song with his  emotive violin accompaniment to complete the ethos of the song. The song plays as both a catharsis and questioning to a trauma that never quite heals.  Beautiful and entrancing the song is touching and memorable.
LISTEN HERE