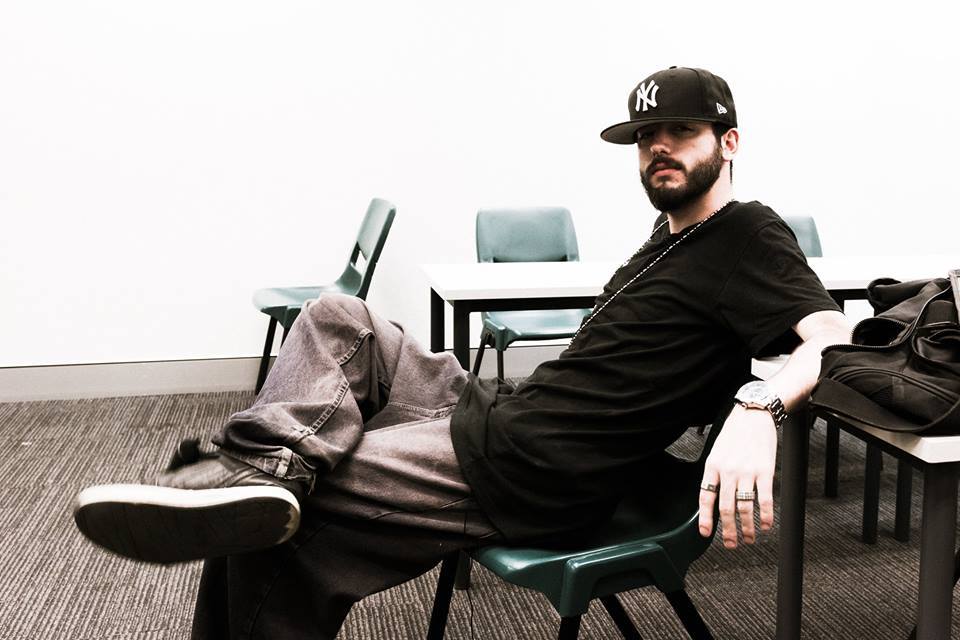 My Name is Reyne Brady (pronounced Rain but spelled differently) AKA Mugzy. I’m 27 yrs old from Sydney Australia (The Land Down Under)

I became interested in hip-hop music and the culture of hip-hop when i was 14 so 2005 my early years in High School.

Around that time I guess you could say I was a bit of a loner which caused me to get punk’d/bullied a lot, also my grades were failing an i had no avenue where i would be in life when I finished school.
So instead I bought myself an iPod an started listening to artists such as Eminem, 50 Cent and Tupac.

Eminem was the one I could related to the most (Even to this day) I know It sounds cliché because I’m a typical whiteboi myself but just the Aggression/Anger in his wordplay/lyrics. It kinda gave me a voice to say I Don’t give a f*** a platform to fight back an take no sh** in this world

Starting off, I would drop down small rhymes in my workbook but I knew if I wanted to progress i would have to write full lyric songs
Also, I  knew if I wanted to be known or respected by the general hip hop community who loves it as much as i do then i would have to do my homework take a trip back in time where it all started in the 70s of South Bronx and learn bit by bit

What inspires me about the culture of hip hop  is that it’s the ONLY music form that you can express yourself in any way/shape/form possible
You pick any other music genre Rock, Pop, Rnb etc etc Trust me they don’t have the same effect that hip hop brings that is why I love it.

50 Cent: When he blew up in the early 00s everyone wanted to be like 50
Even all the whiteboi’s (including myself) rocked the chains, du-rags, baseball caps, jerseys etc etc haha…..sigh yes i did the whole wigger act back in the day…maan i was a mess
Come on it was the times mannn it was a starting point haha sooo corny but I can now look back on it and laugh. But Yo “Get Rich Or Die Tryin” is INSANE (Still to this day) every joint on that album is pure FIRE (G-Unit Forever)

Tupac: What more can i say beyond his name there will never be another Tupac the guy is iconic and a legend in the hip hop game….i reckon if he was still alive he probs could of ran for president 😉

Eminem: I suppose he speaks for all the whiteboi’s who want to get into this hip hop culture.I know it probs sounds cliché to say because i’m white myself but i reckon he was the main one who broke that barrier of hip hop which was formally a black domain of music
For a chance to give white rappers a chance to be heard and at least respected.
I know we had White Artists before Em like “3rd Bass, Beastie Boys, House Of Pain” aye even “Vanilla Ice” but i don’t think they had a big enough impact on the scene like Em did (His the Hip Hop Elvis)

DMX: Raw Gritty so imma stay Sh***y are you with me haha
I love X because of his raw aggressive attitude but also with powerful, catchy lyrics you will never forget through his message
I feel like in my career my flows/vibes are alot like X
(WHERE MY DOGS AT)

NaS: Come on maaaan what else can i say “Illmatic” is a hip hop classic and No:1 Album to go too. If “Illmatic” isn’t in your recommendations then im sorry but you aint hip hop hahaha go bump some “Lil Yachty” Sh*** …….PS “Lonzo Ball”

(PLUS ON A SIDENOTE) My man “Allen Iverson AKA A.I” is a big inspiration to me. Jus his flavour of style. I’m very BIG and a huge critique when it comes to styles specially within hip hop
Majority of today’s hip-hop fashion scene is too feminine for my liking that it doesnt fly with me
But A.I def 100% keeps his flavour FLY

(Next Release Details)
I actually want to get back into the studio ASAP
My 2nd album (Understand Me) released in 2013 so its been 5yrs since ive released anything NEW ive kinda been slackin on music because i’ve been getting into alot of acting.
But i miss music sooo much specially the high/adrenaline of crafting new work, so I’ve got a tone of work to do.

At the moment i have a TONE of beats on my ipod  most are other peoples instrumentals even from the likes of Greek Producer “Yanni” but when i sit back an listen to them i can hear them sounding like masterpieces, so when the time comes ill figure out how to use them.

So hit up my fanpage link here at
https://www.facebook.com/OfficialMugzy/