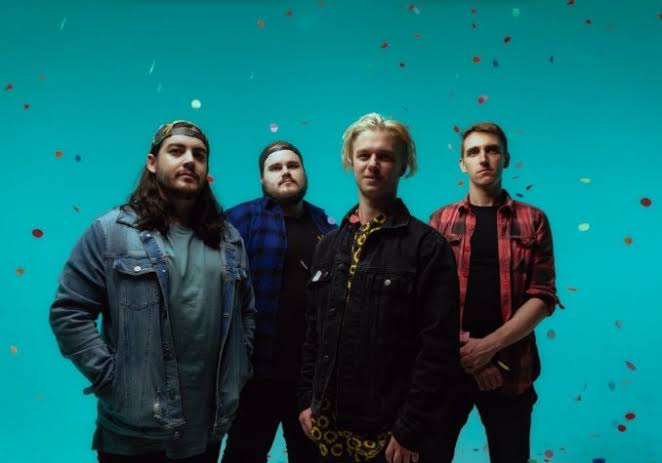 Back in 2020 Brisbane easycore quartet Grizzlyshark unleashed the banger Vicarious, immediately placing them on Australia’s pop punk radar. Fast forward to the present day and the band’s forthcoming EP Mosaic which has already eclipsed expectations and is on track to be their biggest career breakthrough yet.

Co-written by Four Year Strong’s Alan Day, the lead single “TMS” debuted on triple j Short. Fast. Loud and tells of how former lovers meet again as strangers. “TMS” teased the start of a new chapter for Grizzlyshark. “Up until that point we’d released music we were happy with, but never pushed ourselves as much as we knew we could.”

Second single “What’s the Plan, Googlhead” was written by vocalist Andrew Jeffrey and explores the link between his experiences with ADHD (Attention Deficit Hyperactivity Disorder) and 90’s cartoons. “I noticed a theme in many animated shows. The main character is almost always a poster child for ADHD. Rash, impulsive, generally unaware of what is going on around them and hyper-focused. Digimon in particular, one of my childhood favourites, always had the goggle-headed character mess up by brashly charging in, then needing to fix his mistakes and learn from them.”

Maintaining momentum, the band’s third and final single “There’s No I in Quaranteam” has just been added Spotify’s Homegrown + Heavy playlist where is sits among heavy weights like Northland and Parkway Drive.

Mosaic is due out Friday July 29