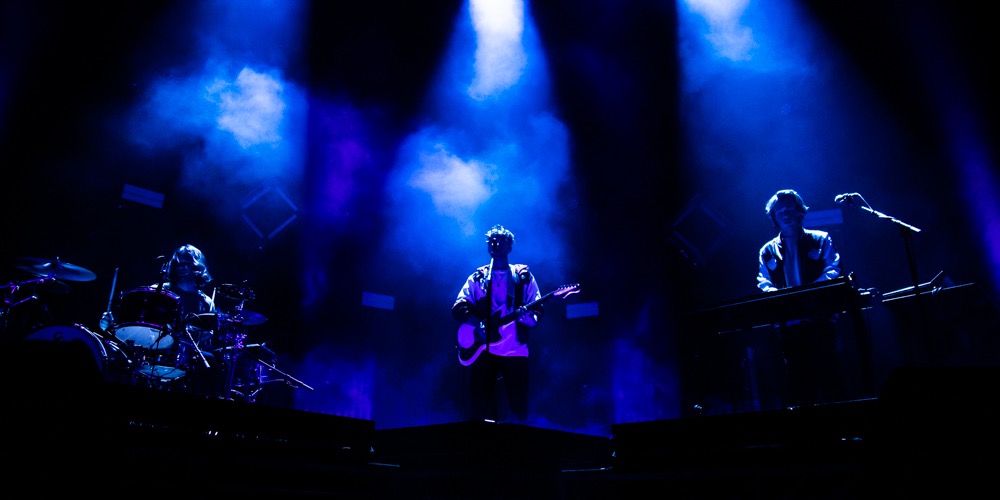 Live Review: Crooked Colours at The Forum, Melbourne
26 May

Diamond shaped mirror balls light up the theatre and begin to create a strobe effect along to the pulsating beats. Crooked Colours make a strong start with ‘Come Back To You’ – a laid back tune that immediately captures our attention and gets us grooving along to the smooth electronica-pop. Tonight, the Australian trio are here to celebrate the release of their latest album ‘Langata’ and so quickly pick up the pace with their hit single ‘Hold On’. The hook-laden dance number is bursting with dreamy synthesisers and bouncy bass lines. “It’s always been a dream of ours to play here and to do two shows it’s amazing,” says lead vocalist Phillip Slabber. They’ve previously played this iconic venue supporting Crystal Castles in 2017 but this weekend has been extra special for them as the headliner playing music of their sophomore album.
Incorporating live drums, guitars, keyboards and synth, they have a distinct and cohesive sound that flows effortlessly from start to finish. It’s clear they’ve put a lot of thought into this set and have curated everything from the lighting to visual design to showcase their new music in the most powerful and engaging way possible. Each track takes us down a different path with a diverse layered production and a superb build-up of progressive sounds.
A couple of surprise guest vocalists join them on stage tonight including Owl Eyes (aka Brooke Addamo) to sing live vocals on ‘Never Dance Alone’ (originally recorded by Ladyhawke) and Ivan Ooze (aka Ben Townsend) for the particularly dance-induced party anthem ‘I Hope You Get It’. Exciting pyrotechnics light up the show with sparklers shooting up off the side of the stage to add a bit of ambience during the deep and heavy banger ‘I C Light’. To mix things up a bit they throw in their triple J Like A Version cover of Baby Bash’s ‘Suga Suga’, turning the noughties rnb hit into a indie slow jam with an unexpected and impressive rap from Slabber.
Despite being a Sunday night, Crooked Colours ensure that everyone has well and truly forgotten about having to wake up and go to work early tomorrow. They’re here to party and keep energy levels to a consistent high. ‘Flow’ and ‘I’ll Be There’ are clear crowd favourites and generate a huge response as the crowd throw their arms up in the air and jump on each other’s shoulders to take in every moment of their solid performance. They make it clear that there’ll be no encore tonight and go out with a huge finish, although the crowd would happily stay and party all night long but hang around until the venue lights come on.

Words by Michael Prebeg
Behind the Lens Monique Pizzica