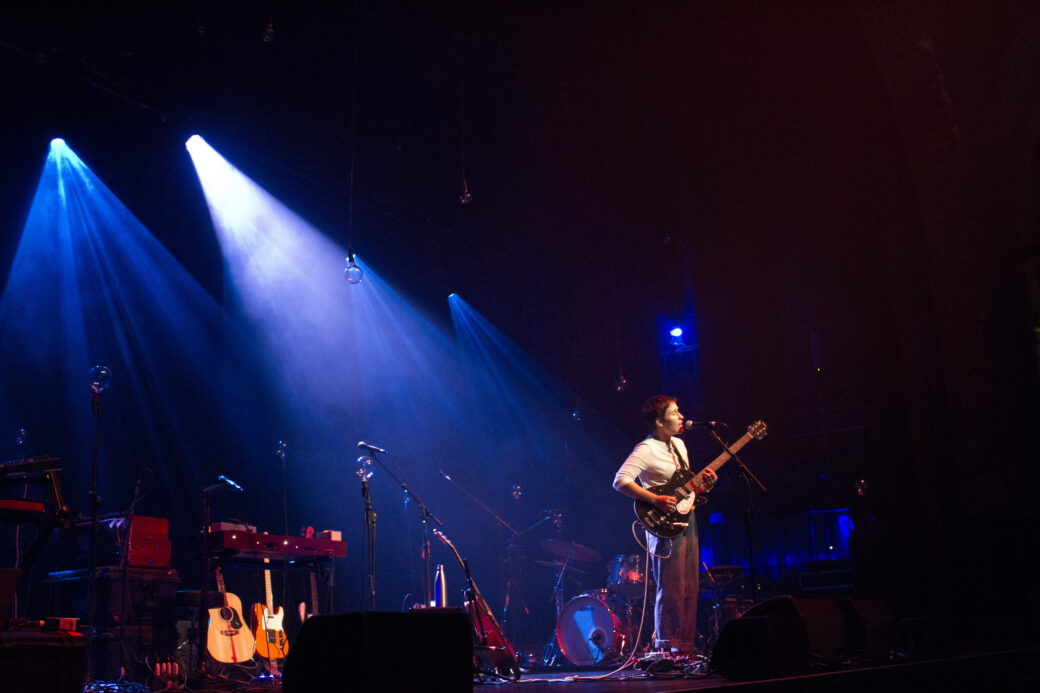 Mimi Gilbert’s tells us it’s her first live show in a year and many in the audience tonight can relate. Originally from the United States, Gilbert is glad to be currently living on Australian shores right now. She shares a very emotional song that was written at the start of the pandemic called ‘Dark Storm’. After pouring her heart out for the track, she tells us that she’s feeling a bit less scared now that she’s on the other side of the tunnel.

The crowd listens intently to Gilbert’s soft harmonies and vulnerable story telling through song. The room is at a standstill and only her acoustic guitar and indie-folk tunes fill the air. She draws a comparison of our intent listening to the recent bird watching hobby she’s recently taken up.

Vintage light globes hang from the ceiling and placed on stands resembling floating orbs to illuminate the stage in a warm glow. Gordi appears behind a keyboard to begin with ‘Aeroplane Bathroom,’ which is the opener for her recently released album ‘Our Two Skins.’ She immediately captures our attention and draws us in to her ethereal soundscape.

“Tonight’s show almost didn’t happen,” she tells us nervously after Melbourne was only released from a lockdown less than 24 hours ago. As a result, there’s an early and a late show to accommodate the capacity limits and the audience is happy to have more than enough personal space to enjoy the show.

Alex Lahey joins Gordi for a surprise song the duo just released a week ago called ‘Dino’s.’ It’s a real treat to hear the song played by both artists together live for the first time. Inspired by a Nashville dive bar where they ate a lot of hot chicken and cold beers, the duo shares a laugh about making the video clip involving a Dolly Parton cardboard cut-out. Lahey stays on to continue playing bass guitar and Gordi then keeps the mood lifted as she sings the self-confessed one happy song (‘Extraordinary Life’) off her latest record.

She reminiscences the last time playing at The Forum she supported Icelandic singer Asgeir. It’s a dream come true for her to be headlining show here tonight and she makes sure she gets the vocal loop for ‘Heaven I know’ right this time minus any unwanted crowd woos. The song is built up beautifully before us and she makes a powerful connection as her immersive electro-acoustic blended sound washes over the audience.

Gordi explains the process of making her recent album in a cottage at her parent’s farm, ironically in isolation pre-COVID. The unique organic soundscape she used to record the songs includes a harmonica and a wasp’s nest she found in a sheep yard shed that she used to run the piano recording through to add warmth. She admits she’s glad to be back on stage in front of people in Melbourne and recreates the sounds as best she can in a live setting.

After a quick encore charade, she has two more songs prepared for us including ‘Radiator’ and her recent Triple J Like A Version cover of Miley Cyrus’ ‘Wrecking Ball’. Gordi’s version is a bit more alternate with a guitar-heavy instrumentation and plenty of synth to give it a whole new feel and she absolutely knocks it out of the park.