Like Thieves, Brisbane’s premier prog masters haven’t ventured South for several years so it was an eager crowd that awaited them at The Evelyn Hotel in Melbourne. The NEVER SEE IT COMING TOUR following on from the hugely successful Butterfly Effect tour, with Clint Boge at the helm once again.

With two stellar EPs under their belts ‘The Wolves at Winter’s Edge’ and 2014 release ‘Autumn’s Twilight’ the lads have amassed quite a strong and dedicated fan-base as the Melbourne iconic venue filled to the brim with fans eager to hear the music
.
A fine evening in the inner suburbs of Melbourne had people queuing outside the venue for an 8.30 starting time. The bar and Merch desk soon got a good working over as support bands Red Lotus and Khan got the thirsty fans into the mood with great sets of some solid prog rock.
With a dark back-lit stage, the mood was set for the main act to commence, the underground feel of the venue adding to the atmosphere exposed brickwork giving it a raw feel. The first few notes of ‘Wake from Eternal Sleep’ set the pattern of what the evening had in store.

Oden Johansson and Clint Gough created a solid foundation of both bass and guitar working in synchronicity to superbly blend with the hauntingly beautiful voice of Clint Boge, a voice that is instantly recognizable no matter what band he fronts. Marrying the sound of percussionist Daniel Trickett to round out what is a seemingly effortless combination making the evenings entertainment mesmerizing and captivating for the mass of listeners gathered around the modest stage.

Continuing to punch through their set with favourites such as Brave the Day, Echoes of Time, Picture Perfect, Killing Reason, Ghost in the Machine before closing out the night with the classic The Wolves at Winter’s Edge.
The tour continues with a final Brisbane show.
Words by Sebastian Marino
Behind the lens Sebastian Marino 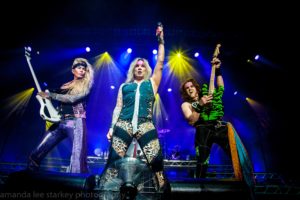