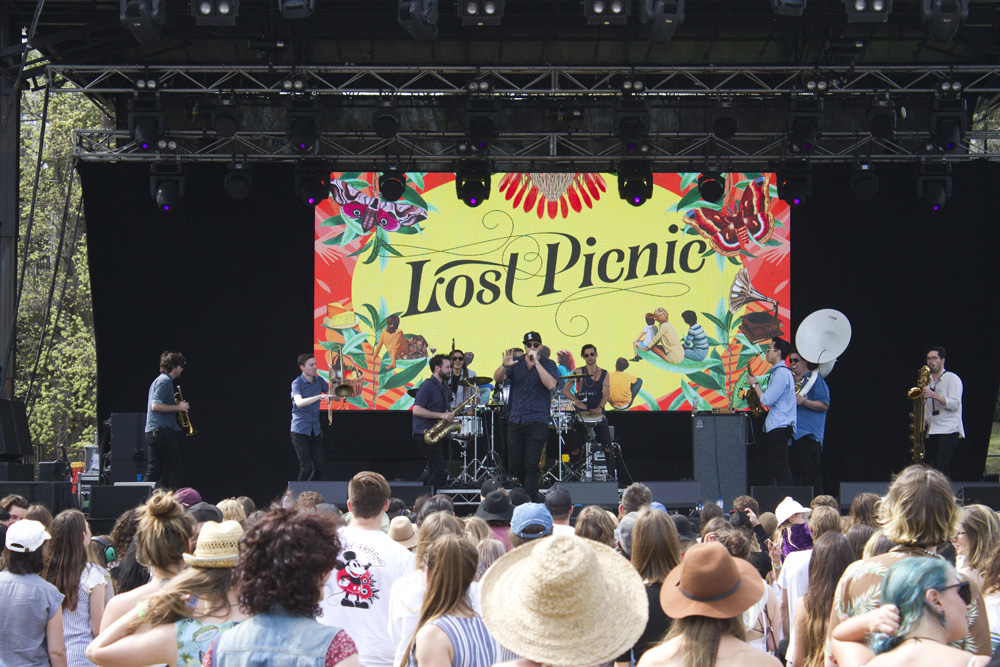 It couldn’t be a more perfect day for the inaugural Lost Picnic in Melbourne. As we enter the festival grounds, the sun is shining and many punters can be seen barefoot and relaxing on picnic blankets surrounding the stage. There’s plenty of food trucks and bars around to stock up on food and drink throughout the day and the kids can even run around and enjoy the fun activities and live entertainment.

Rising star Odette, captures our attention early on with a powerhouse performance of her heart-breaking songs loaded with deeply intricate lyrics. She stands behind her keyboard and blows us away with her impressive soulful, R&B-inflected vocals and beat poetry. By the third song in, her microphone cuts out but nothing stops her from delivering every moment with an intense passion. She shares her emotionally charged stories through a few impressive spoken word songs including ‘Lotus Eaters’ and the first song she put out into the world called ‘Watch Me Read You.’

Hot Potato Band hit us with a surge of skyrocketing energy to get the crowd up on their feet and dancing on the lawn. The funky ten-piece band creates the atmosphere of a New Orleans style street band with an infectious and engaging stage presence. They perform a range of unique covers including ‘Dang!’ dedicated to the late Mac Miller.

Marlon Williams captivates listeners with his timeless voice in the late afternoon. His melancholic vintage croons include many songs about jealousy and heartache that combine country, jailhouse ballads, bluegrass and folk sounds. Williams’ music extends to the generations present in the audience, which makes him a fitting artist on the line up. He commands the stage by delivering a captivating and instinctive performance with his charismatic and relaxed vibe and a few cheeky hip-dips as he moves around the stage.

After a quick puppet show to entertain the younger audience watching from above their parent’s shoulders, Meg Mac emerges in a black and white checkered ensemble under a wide-brimmed hat. Mac’s flawless style with attention to detail runs all the way down to the oversized cuffs of her white shirt, complete with her initials stitched on the end. The power in her soulful vocals reaches soaring heights with a flawless delivery. She continues to bust out some huge notes that send chills down spines with her triple j Like A Version cover of Tame Impala’s ‘Let It Happen.’

“I get told I can play for a certain amount of time but my songs are very long”, says Tash Sultana as she commences her extended headline set. “You hear me on the radio and that’s the radio way but this is the actual way,” she continues. There’s something special about seeing a performer like Sultana play live and makes the appreciation of her music even greater than listening to a recorded version. Many of her songs feel like they go on forever but in a good way that you never want to end.

Sultana starts each song with a slow build up and then gradually gains momentum before exploding in unexpected tangents with electric instrumentals to get our hearts racing. With a three-tier high stack of keyboards, synths, drum pads and sampling equipment to her left, multiple guitars to her right, pedals down below and two microphones out in front, Sultana gets completely carried away in her element and we get lost in the moment with her. It’s exciting to watch her perform as each song builds layers upon layers of looped sounds including a trombone and a pan flute thrown into the crazy whirlwind of organic sounds. “I used to think I’d just play music as a little kid. I see all these kids here and you can too. I had all these teachers tell me that I couldn’t and here I am today,” Sultana concludes.