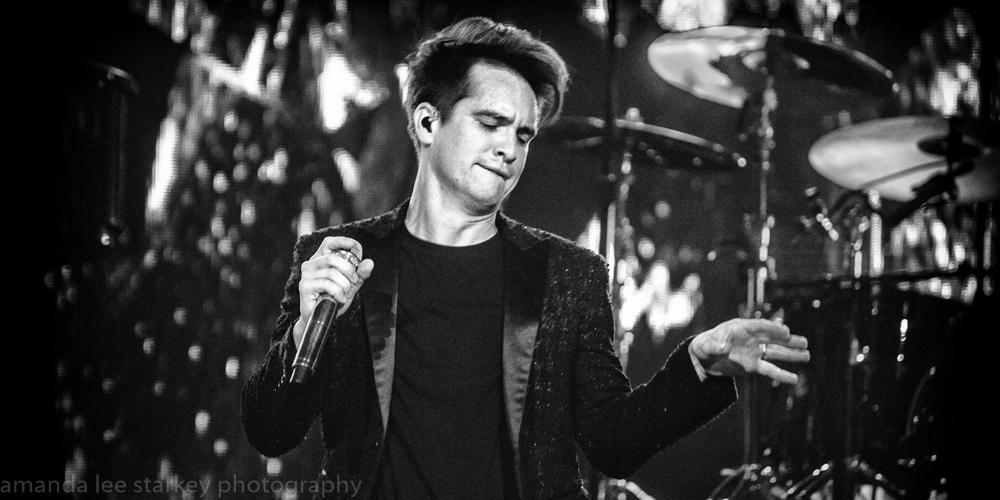 Fifteen years ago, in the early start of the century a new music era was ushered in, and a war of bands started as the rise of ‘ Emo’ music began. At the forefront of the scene race was Panic! at the Disco. Fifteen years later and they’re still going strong, having recently released ‘ Pray for the Wicked’.

Heading into the arena early and the line up is back as far as the eye can see, a veritable sea of enthusiastic fans that are dressed the customary black with smatterings of glitter and sequins here and there.

As the clock on the giant over head screen ticks down the excitement hits fever pitch, the screams almost deafening as silver streamers pop to mark the arrival of Brendon Urie to the stage. From then on in its non- stop as the front man is a tornado of energy and excitement.

Running through the hits at almost break neck speed Urie is electric to watch, even when he’s not standing on his baby Grand piano or back flipping off the stage.  He is having as much fun performing as the crowd are dancing along to ‘ LA Devotee’, ‘ Golden Days’ and ‘ Dancing’s Not a Crime’. The only time the crowd seem to falter is when he perfectly covers Cindy Lauper’s ‘ Girls Wanna Have Fun’ – a song most of the audience were possibly born well after its release. Its a nice nod to his performance in Kinky Boots on Broadway in 2017, to which Lauper wrote the musical score.

He does manage to get an entire sing-a- long happening for Queen’s ‘ Bohemian Rhapsody’ which he plays with expertise on the piano, his four octave voice hitting the notes with perfection and flawlessness. Its one of those take- away moments of the night that will be long remembered.

Having announced his pan-sexuality some time ago for the ‘Girls/Girls/ Boys’ colored love hearts have been handed out and as rainbow flags are thrown onto the stage the room becomes a untied sea of rainbow colors as Urie races to collect and drape himself in pride flags. Its a moment of unity and love, the room for one moment becoming a single entity celebrating pride.

As the evening draws to a close, confetti canons exploding into the room for the final song ‘ Victorious’ its clear to see that Brendon Urie is an engaging performer that is able to have an entire room captivated for almost two hours of visual entertainment.