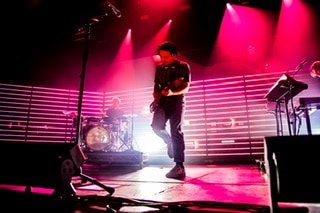 Supported by Kim Churchill
Kim Churchill stands underneath a golden spotlight and recounts when he was just seventeen years old when he told his careers advisor that he wanted to buy a camper van and drive around and play music. Despite being advised against this he’s pretty glad he did it anyway and so are we.
He brings his raw folk energy to the stage as a supercharged one-man-band with just an acoustic guitar and harmonica to help him drive the fast-melodic pace. He reveals his next song was written about a second-hand car, although confesses he actually lives in a van, not a car but jokes that cars are more accessible to people.
After travelling all the way from Merimbula across to three continents in multiple campervans and playing gigs, he sings about eventually becoming disillusioned along the way. “Paying attention is the most important thing you can do,” he says as he sings ‘Don’t Leave Your Life Too Long.’
Before ending his set with ‘Window To The Sky’ (a song about washing dishes), he reveals that he picks up rocks in lots of interesting places. “I keep a rock in my pocket to remind me to be grateful for something,” says Churchill. He believes his gratitude rock makes him a slightly happier person and encourages us to buy some of his gratitude journals for sale tonight over at the merch desk.
Milky Chance appear below a backdrop of starry night sky with a moon high above the stage illuminates Festival Hall. LED lights and lasers begin to strobe as they kick off with tracks from their latest album ‘Mind The Moon.’ “Coming my back to Australia is a really big deal for us”, says lead singer Clemens Rehbein. The band is in awe after travelling all the way from Germany, yet they have such a large fan base here and around the world listening to their music. “Our first time was in 2015 and it’s always uncertain in a music career but hearing everyone singing along to old and new songs is just mind blowing,” he exclaims.
Milky Chance elevates us with their infectious feel-good vibes and catchy rhythms to dance along to. Their stage presence is incredible to watch as each band member feeds off the energy of each other and the crowd who jump around with excitement. They play a new song ‘Daydreaming’ which they recorded with local Melbournian Tash Sultana. Whilst she couldn’t be here tonight to perform it with them, she did remind the band that it’s her dad’s birthday tonight and Mr Sultana stands up on the balcony to salute them.
Crowd favourite ‘Flashed Junk Mind’ gets us moving with a psychedelic dance, driven by a reggae-infused groove. They then tease the audience a bit before playing their biggest track ‘Stolen Dance’ and it’s a huge moment when it finally drops. Just when we think the show has come to an end they tell us they’re going to do an encore of three songs so they keep the party going and invite Kim Churchill up on stage to join them with his harmonica for an improvised jam session and a final send off.
Words by Michael Prebeg