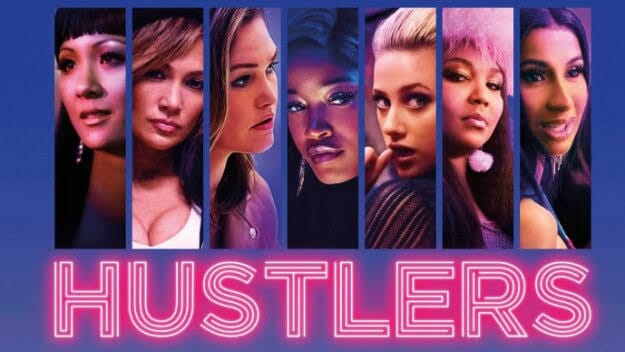 Hookers with a heart of coal

The ironically named Destiny (Crazy Rich Asian’s Constance Wu) is our entry into the darkly grotesque stripper scene of pre-crash Wall Street, New York City, circa 2007. There’s a lot of money to be made for a pretty, Asian new girl, but she hasn’t worked out how.

We watch her sad but resigned face apply lush makeup and then follow a procession of multi-racial women (including OMG Lizzo and Cardi B) as they walk out into the dark, red-lit stage of the strip club like Bizarro World’s Beauty Contest. America, here are your handmaids gentlemen!.

The women aren’t wearing much except heels and a handbag – for credit cards – and Destiny is observed pasting on a false smile each time she encounters one of the suited, smirking and sweaty white patrons. We watch her go through the motions of several unpleasant lap dances, followed by the owners and bouncers taking their cut of her dwindling tips, then a long, sleepy bus ride back to her ageing Nai-Nai who she’s supporting.

The plot, loosely based on a New York Times article of real events, centres on a crime-ring of sort. In post-crash NYC, desperate strippers turn to ‘fishing’. That’s picking up men in bars and then bringing them back to the strip club to max out their corporate cards and share the profits. The alternative for many is prostitution or a minimum wage retail job – clearly incompatible with raising their kids alone.

Many viewers have compared Hustlers to Scorcese’s Goodfellas – slow-mo, montages, the seedy underworld, the knowing voice-over, lots of cash-flash – but it feels more like his Wolf of Wall Street – if he’d made it from the many semi-naked, voiceless women’s point of view.

None of this fancy analysis matters when Jennifer Lopez is on screen.

Lopez radiates star power and chews up every scene. She is Ramona, the Jenny-from-the-block veteran dancer, mother-of-one, mother-hen and fishing mastermind. Lopez is the unequivical radiant star of Hustlers and worth your money just for her performance.

She is so incredibly sexy, and a powerful presence in every scene. You get glimpses of her cheeky rom-com expertise mixed with serious acting chops not seen since Out of Sight … although it’s hard to concentrate when you realise that a 50-year-old woman has the body of an elite gymnast and an ass that Kardashians envy.

The best scenes follow her taking Destiny under her (fur coat) wing and raking it in as a sexy Latina / Asian dancer duo. In those scenes, when they dance together, you can really see Destiny enjoying her work and her life.

The flattest scenes are also a duo. Here it’s Destiny with the excellent Julia Stiles, as the priveledged reporter, in a flash-forward storytelling device. However seeing Destiny now, with her desperate housewives house and outfit, compared to her dancing days, brings tonal contrast.

There are some odd stylistic choices in theses scenes that don’t match the party atmosphere of the club and fishing days. The critical friendship of Ramona and Destiny is also undermined by the odd relationship with the reporter. ‘What is Destiny hiding and why?’ is just a distraction.

Back on track in the back half of the film we get a final set of montages of fat New York cops dealing with the fall out of rich white guys demanding action and the inevitable crime doesn’t pay ending at the precinct.

Hustlers is a fun and flashy extended video-clip film about the power of the not-powerful – ethnic and poor American women – with great bodies and false eyelashes.It’s a little shallow and patchy due to the decade-long time arch and the many characters we need to care for (too many), but overall it’s a fun ride at the cinema.

Irena Bee is a movie and TV critic and PhD business student. She is a communications trainer and expert for nonprofits, start-ups and community groups. She runs 44 Playook and you can find her @PRproAus and at 44Playbook.