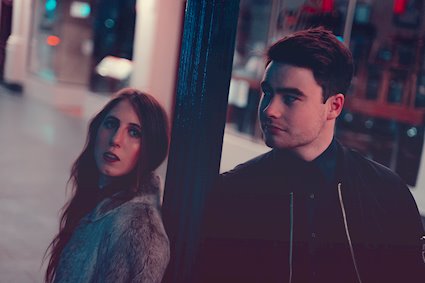 LouSkylar are stepping up with their next single Stop, Go ft. KAVI, a deeply illusionary and insightful cut of electro pop. This comes off the back of the successful release of Damaged Goods in February 2019 which achieved high rotation on Triple J Unearthed and MOOD Media in-store playlists as well as praise from the likes of Happy Mag, SYN, Beat Magazine and 27 Magazine.

With thick waves of warm bass and agile percussion, Stop, Go is heady and hypnotising as singer and co-writer Jessica Frizziero navigates the to and fro of complex relationships stating “I remember likening it to driving manual in tedious peak hour traffic – you’re constantly stopping and starting and just when you think you’re going somewhere, you’re stopping again.”

After launching Damaged Goods with local Melbourne act KAVI and eager to start working with feature artists, the duo decided to bring KAVI onboard for Stop, Go. Co-writer and producer Nathan Batham, keen to work with the emerging talent says “He’s such a genuine, humble artist with an amazing songwriting technique and we just knew right from the outset, we should collab. Stop, Go was the perfect opportunity and we love the flavour he brought to the track with his soulful lyrics and unique tone.”

Formed in 2017, LouSkylar’s debut single Sin garnered favourable attention from the outset, charting at number 13 on Triple J Unearthed charts and number 4 on the electronic charts. The duo have since proved consistent and reliable in releasing and performing having held a successful monthly residency at Melbourne’s esteemed venue The Gasometer and hosting an underground party in partnership with popular Melbourne film lab Film Never Die.

From the schismatic vocal samples to sharing their platform with peers, LouSkylar are proving that they’re approach to pop music and community matures with every advancement in their repertoire. Stop, Go ft. KAVI shines in the revealing light of their progression.