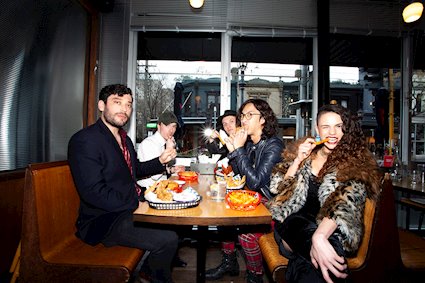 Based in the heart of Melbourne, TAPES has its finger on the pulse of the powerhouse city. Concentrating on the flow-on from release of their debut single HIGHER, which saw great success, they’re now ready to open it up with the release of their second single that’ll free you from the grind in 9-5.

Dappled with rejuvenating keys and exultant harmonies, 9-5 signals a band with a hand to the heart and and a real eye on what happens from the street to the club in order to make love and life work for you. TAPES is quickly building a reputation as being one the best up and coming live bands. The commanding vocals of front-woman, Teila Packman, connects this 5-piece with the realm of righteous parties with grooves set to run you into the morning feeling free and fresh.

To celebrate the launch, TAPES are hosting a spectacular event at the iconic Toff in Town in Melbourne’s CBD on the 7th of March. In an unreserved commitment to drawing on the soul of the city, rapper/crooner Soliloquy and alt-RnB artist TEAGAN will join in a night of communal groove and heightened spirit, an event where the cornerstones of neo-soul are emboldened.

TAPES knows 9-5 communicates how tiring it is to get your money and life working in tandem. Within this capable crew is the ever-present endeavour to survive the hustle and feed the soul through song and dance, shout them out:
Teila Packman / Vocals, Ben Karklins / Keyboard, Guitar
Conan Greenway / Guitar, Zach Fitzpatrick / Drums and
Darren Lau / Bass.