GLOBAL ‘HOLD YOUR NERVE’ TOUR KICKS OFF IN AUSTRALIA NEXT MONTH

Following on from the release of new music last month, Boy & Bear today have shared the official video for their upbeat and optimistic new single Hold Your Nerve.

The video celebrates the return of the Sydney band with an intimate and energetic performance video, shot by director Onil Kotian (Angus & Julia ‘Snow’ and ‘Cellar Door’) who the band worked with for the first time.

Shot in black and white, the video is intercut between scenes of a constantly revolving camera around the band’s performance and a series of open-ended abstract visuals that add texture. The coloured visuals are lifted from the artwork of the band’s forthcoming album which was designed by Leif Podhajsky who is behind the album artwork for artists Tame Impala, London Grammar and Foals to name but a few and the creative director for Vivid Live Festival.

Director Onil Kotian says, “When I first heard ‘Hold Your Nerve’, what resonated for me very early on was to be minimal & abstract in the concept – that didn’t detract from this energetic rhythmic drive that the song presented. Focusing on generating movement in the video that mirrored the dynamic of the song became the focal point of the execution.”

Killian Gavin from Boy & Bear says of the video, “Making this clip was a real treat. We’d obviously been away from this world for a few years and were keen to rethink how we’ve gone about clips in the past. We’ve often layered stories over performances as we felt like it helped make clips more intriguing. But this was different. We wanted to find a way to captivate an audience with just a performance-based clip. It was a challenge we sort of came up with on the spot while shooting Day 1.”

Produced by the band and Collin Dupuis (Lana Del Rey, The Black Keys) in Nashville’s Southern Ground studios, and mixed in part by Grammy Award-winning mix engineer Tom Elmhirst (Arcade Fire, Beck, Lorde, Amy Winehouse), the 12-track album will include the recently released ‘Hold Your Nerve’ and ‘Work Of Art’.

Met with an incredible reception from fans and media on release, their first and current single ‘Hold Your Nerve’ was instantly added to triple j (hitting #1 Most Played on the station) and added to playlists across the country. The first new music since the release of their 2015 #1 ARIA album Limit Of Love, it revealed the personal and professional storm of a band delivering their next album. One they feared might never come to exist. As first told on triple j Hack, the band were faced with the challenge of vocalist-guitarist Dave Hosking battling a debilitating illness, that pushed them to create their finest album to date; a record that takes the trademark analogue warmth of their sound and pushes it to places the Sydney quintet have never explored before.

To protect the purity of their musical vision, the band – which also features guitarist Killian Gavin, drummer Tim Hart, bassist Dave Symes and keyboardist Jon Hart – wrote a brief for the album; a

clear memorandum of exactly how they wanted it to sound, and how they would achieve it. “We still wanted ’70s tones, ’70s drum tones and guitar tones, we still wanted to embrace harmonies, but we wanted to push it more into the 21st Century and mess with it a little bit, more than we had in the past,” says Hosking.

While Hosking’s health remains a work in progress, the fact that he and the band have reached this point is nothing short of a triumph. Motivation was never hard to find.

Boy & Bear will be hitting the road once again for their global ‘Hold Your Nerve Tour’ which kicks off on Thursday August 15 at at The Tivoli in Brisbane. Tickets to their Brisbane show have already sold out with Perth, Melbourne and Sydney selling fast. 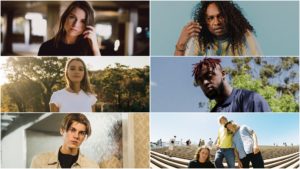