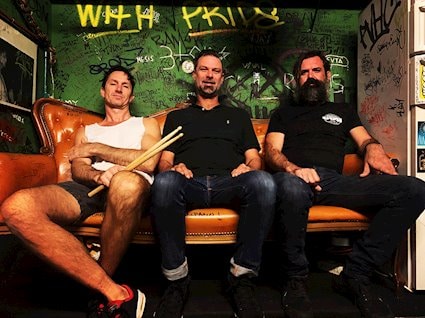 After a five year hiatus that threatened to extend a lifetime, the Bondi (now living in Byron Bay) three-piece Cog continue to shift gears with the announcement that they’re finally releasing more of their back catalogue, notably Just Visiting Album (remastered), Open Up EP and 12 Years With You Live Album on November 4th.

Having reconnected with fans during their co-headlining Distant Lands tour of Europe alongside of Australian contemporaries SLEEPMAKESWAVES, and their national Drawn Together Tour with Osaka Punch and Omnific, Cog have witnessed the enduring power of their catalogue. As such they’re releasing the material that has previously acted as book ends to their highly successful New Normal (2005) and Sharing Space (2008).

EP releases Just Visiting, Pt. 1 (2002) and Just Visiting, Pt. 2 (2002) which in April 2003 appeared on the ARIA Heavy Rock & Metal Singles Chart, with Part One peaking at No. 14 and Part Two reaching No. 4. Both of these EPs have been remastered as a full length album, put together as they had always intended to be.

Maxi single Open Up contains a cover of the Public Image Limited/Leftfield track Open Up, a two and a half minute extension of the track plus a remix by Speed Pan Boucher.

The Sound Of Three / 12 Years With You DVD/CD was released to welcoming long time fans. The package included a sold out live show recorded in their home town of Sydney at the famous Coogee Bay Hotel. This show, at the height of their career, was to cement the bands awesome live performance in stone. With a documentary from when the band first began to the present day. The history showed the inner workings of the band, dynamics and rise to becoming one of Australia’s well respected hard working bands. The DVD / Live Album CD was to go on to reached number 1# on the ARIA DVD charts. This audio-only release of 12 Years With You LIVE is a compendium of everything that helped establish the band as one of Australia’s most respected heavy prog rock acts.

Rather than rest on their laurels, Cog continue to be active on the touring circuit, seemingly determined to make up for lost time and repay their loyal fanbase for their unwavering support. The alternative rock trio are immersing themselves in their craft with renewed vigour, already having a plethora of new ideas and structures from which to draw new material. One could say Cog has now set the intention and free will is manifesting into what could become their 4th Album release? Time will tell.

A little history lays a foundation of integrity for a band like Cog. These moments in time contribute to the artistic value of the music world to date, and for Cog, recognising and appreciating the value that these songs have to their fans give them the greatest pleasure to share them again.