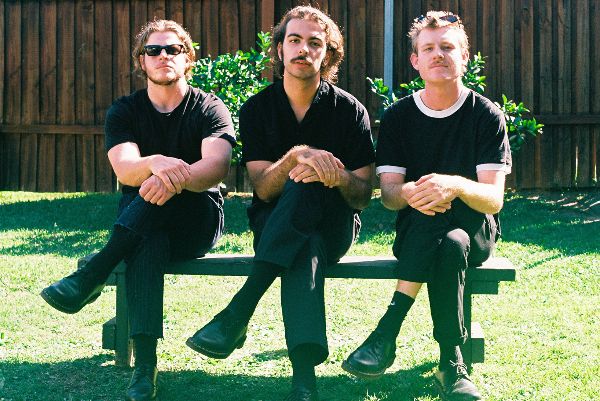 CROCODYLUS GET YOUR BLOOD PUMPING WITH ‘ADRENALINE’

FOR IMMEDIATE RELEASE:
STREAM ‘ADRENALINE’ HERE
DOWNLOAD ASSETS HERE
“Crocodyl-yes.” – The Music
“…Crocodylus [are] one of the most unique bands in Australia.” – Backyard Opera
“Crocodylus kick the energy up to 11…” – Happy Mag
“This band have fangs.” – Tommy Faith, triple j

Recently completing a national headline tour with viral punks The Chats, Crocodylus continue their fast-paced, jam-packed 2019 with their second release of the year in the short and loud ‘Adrenaline’.

Coming in at under two and a half minutes, the frenetic intensity of ‘Adrenaline’ matches the subject matter. Comprised of signature, grunge-tinged riffs matched by crowd sourced chorus’ it’s impossible to not move to.

“Wrote this for a buddy of mine, pretty sure he liked it,” bassist and singer Josh explains. He continues, “Solo has some Motörhead vibes and the back up in the chorus has some Misfits vibes, two bands the three of us love. Been playing this in the set for a while now so keen to get it out to the rest of the world.”

Crocodylus returned in May with the dynamic ‘Ghosts’ which was premiered on triple j’s Home & Hosed and added to triple j unearthed and EDGE Radio. The part vintage horror, part arthouse cinema film clip produced by regular collaborator Jamieson Kerr was lauded by The Music and added to Rage.

They spent last month traipsing the country with mullet-bearers The Chats on their national ‘Pub Feed’ tour, playing their show-stopping set to sold out crowds every night and adding to their legions of fans. Their unpredictable live show has been honed on stages around the country, supporting the likes of Ocean Alley, Dune Rats, Hockey Dad and Psychedelic Porn Crumpets alongside a tri-headline tour with A. Swayze and the Ghosts and VOIID to kick off 2019. Never not on the road, Crocodylus have just been announced on a raft of shows including Yours & Owls Festival alongside Courtney Barnett and Bad // Dreems.

Last year saw the most acclaimed releases from the well-toured trio, even while only delivering two singles. The former, ‘My Love’ is a slice of vintage surf-rock indicative of the band’s live shows and was well-supported with sold-out launch gigs at The Lansdowne in Sydney, and The Tote in Melbourne and came in at #14 on Happy Mag’s Top 100 Songs of 2018. The latter, ‘My Baby’, is a 60’s-style crooner and came out alongside a choreographed music video premiered by Triple J Unearthed and heralded by Life Without Andy as the #1 Indie Music Video of that year.

‘Adrenaline’ is another feather for Crocodylus’ multi-faceted bow and will guarantee to see you in the mosh.