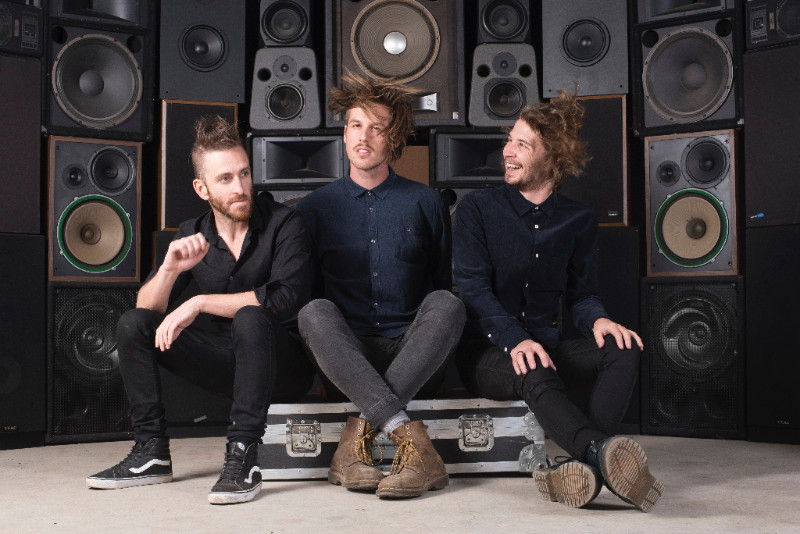 The verses are gooey and sticky like a kids lolly pop, expertly building up the anticipation to the chorus which pays off in spades. Taking cues from The Black Keys and Queens of The Stoneage the chorus will have you reaching for the gear stick to kick into overdrive. Then just when you thought you’d heard all there was, the solo rips whatever brain cells you have left and takes the song into the stratosphere. Keep a close ear to this one, cause Muse will no doubt be stealing it for their next hit. ‘Sinister Sound’ is equal parts rocktastic, thunderous groove and pop hit and will be on your stereo mixtape for a long time to come.

“Lyrically, ‘Sinister Sound’ addresses the struggle of trying to make it in the music business. Musically it’s our attempt at making the stompiest, loudest, fuzz-on-the-peaches pop song we could manage….” – Levi – The Kite Machine

“Utterly addictive… the whole thing is hardly tame.“ – The Ripe

“The band have developed a nasty habit of making what the people want.” Music Feeds

Their video clip is an assault on the senses. Lulling you into a false sense of security the visuals begin to dart and jump about. Then as the song intensifies so too does the imagery. Getting more an more chaotic the night time rolls in and so does smoke, lights and cars. It’s like the the band have performed some sort of voodoo dance that are drawing possessed killer cars to the scene that they then have to fight off with their fierce music. “Standing out in the middle of a field for a whole night in the middle of winter wasn’t a spectacular idea… but we think we got a pretty spectacular result.” Levi – The Kite Machine

Their 2015 EP, ‘LUNATICS’, had two singles top the Triple J Unearthed overall charts, whilst 2016 single ‘Charlotte’ has topped over 300k streams on spotify alone, marking the beginning of their astronomical rise on the Aussie music scene. Having previously shared stages with Pierce Brothers, Kingswood and Stonefield the band are no strangers to taking on big stages and big crowds and are excited to head on on the road for their ‘Sinister Sound’ headline tour.