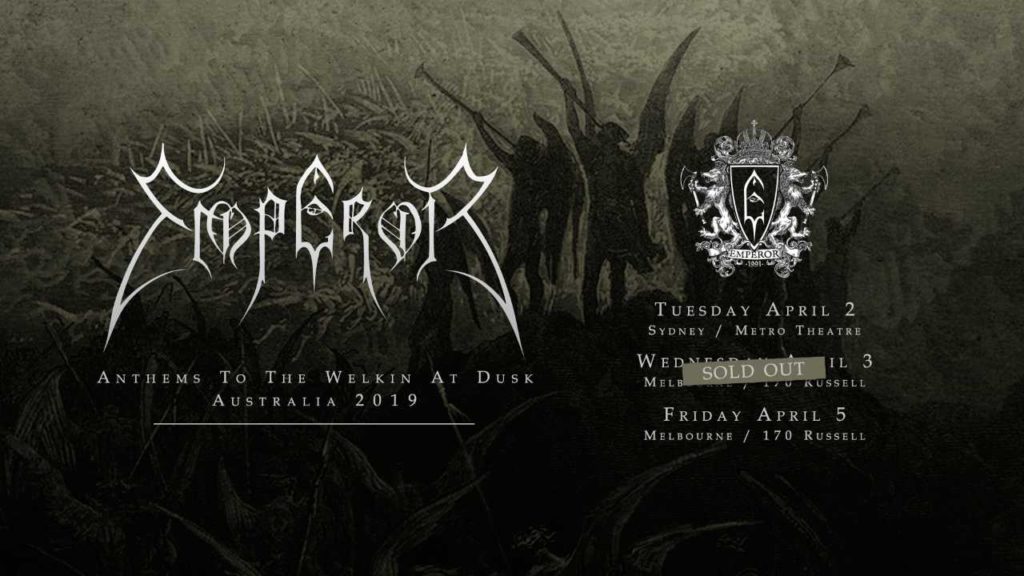 ANTHEMS TO THE WELKIN AT DUSK

With EMPEROR’S first ever Melbourne headlining show selling out rapidly, and with a horde of fans missing out on tickets, it has been decided that a second and final Melbourne show will be added, along with a strictly limited amount of VIP meet & greets.

Eventually there comes a time when the hype about a band becomes superfluous, and their status alone speaks volumes. Such is the case with EMPEROR, the black metal gods hailing from Telemark, Norway. EMPEROR has become known as one of the originators of symphonic Black Metal that Norway is internationally renowned for.

The wait has been long, but the time has come for Australian fans.

In two exclusive shows only and never to be repeated in this territory, EMPEROR perform the entire ‘Anthems To The Welkin At Dusk’ album. One of the most ambitious and important black metal releases to date.

Australia, you now have your chance to embrace the epic savagery.

“Australian hordes!
We are finally coming your way.
April 2019 it is – hope to see you all there!
Emperial regards, Ihsahn, Samoth, Trym”

VIP TICKETS ON SALE IMMEDIATELY at:

GA TICKETS ON SALE IMMEDIATELY at: