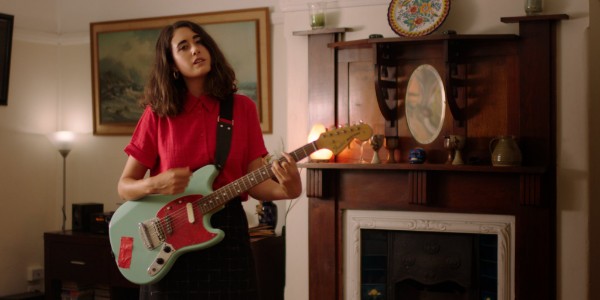 Following the momentous success of ‘Dead or Alive’, Grace Turner has today unveiled the warm and fuzzy accompanying video.

Currently, ‘Dead or Alive’ has received over 309,000 streams pushing Turner into Spotify US’ Viral 50, peaking at #24 alongside Drake, Maggie Rogers and John Mayer. She was also profiled by Spotify, including her in their ‘Fresh Finds’ playlist – an impressive feat for an artist with a two-song deep Spotify catalogue.

Highlighting personal struggles ‘Dead or Alive’ was born from a conversation with a concerned friend, and the video follows suit with an outpouring of human connection. Beginning as a house party, it slowly evolves into a mass group hug, pulling viewers into the emotional track.

Grace elaborates “On shoot day we invited a bunch of our friends over to Tom’s house and literally hugged one another for around 10 hours. The idea was that it would reflect the way our social circles help us through hard times.”

Turner also recently supported Gabriella Cohen in Sydney; singing to a quiet room, with everyone completely hooked on her every note.

The single follows the release of ‘Angry’ in late 2017 which turned more than a few heads with features on Crack in the Road, Ear to the Ground and Obscure Sounds. The alt-folk singer songwriter’s knack to write emotive, vulnerable songs is nothing short of addictive, and when coupled with her authenticity and alluring vocals, ensures she stands out in a crowded genre.

To anyone that was swept away by the charm and honesty of ‘Angry’, Turner delivers big time with ‘Dead or Alive’.

“Please excuse me whilst I pick myself up off the floor” – Tommy Faith, triple j
“Another jaw-dropper” – The Revue