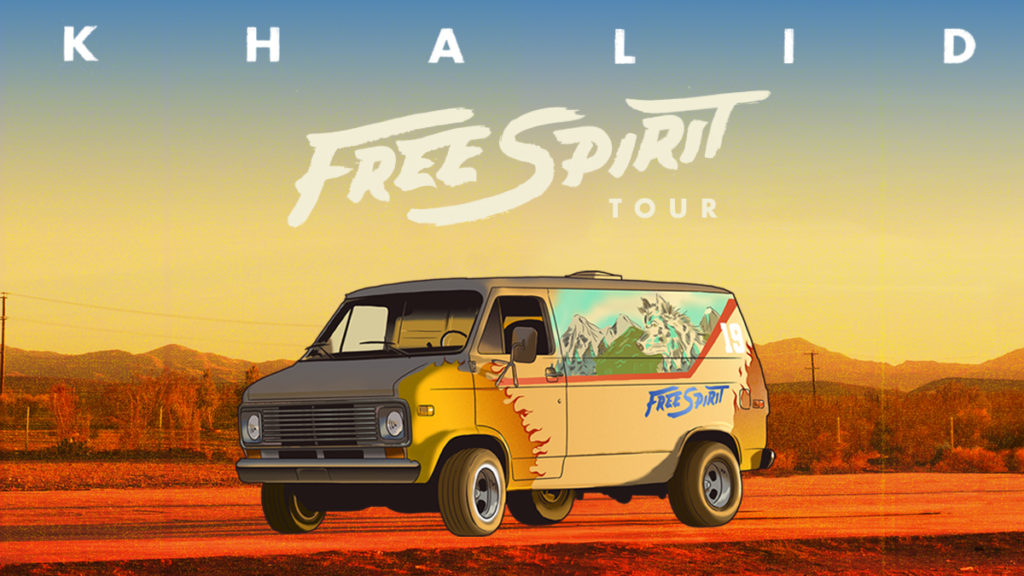 KHALID
WILL BRING THE FREE SPIRIT TOUR
TO AUSTRALIA & NEW ZEALAND
IN NOVEMBER & DECEMBER 2019
Grammy nominee and multi-Platinum artist Khalid is returning to Australia and New Zealand on the Free Spirit Tour
He will play shows in Canberra, Auckland, Brisbane, Melbourne, Ballarat, Adelaide, and Sydney in November and December 2019
‘Talk’, the lead single from Khalid’s new album, Free Spirit, was co-written with UK duo Disclosure
Some of his other hits include ‘Young Dumb & Broke’, ‘Better’, and collaborations with a who’s who of current music – Normani, 6LACK, Ty Dolla $ign, Martin Garrix, benny blanco, Halsey, Shawn Mendes, Calvin Harris, Future, Logic, Alessia Cara, and close friend Billie Eilish
Illusive Presents, Frontier Touring and AEG Presents are thrilled to announce that 21-year old superstar Khalid is heading back to Australian and New Zealand shores for his Free Spirit Tour. With his Grammy-nominated debut album American Teen having been certified double Platinum and his new record Free Spirit finally out in the world, there’s no better time for fans down under to experience the El Paso singer’s magic.

Khalid will kick off the Free Spirit Tour in Auckland on Thursday 21 November, before crossing the Tasman for shows in Canberra, Brisbane, Melbourne, Ballarat, Adelaide and Sydney. Don’t forget – the Australian and New Zealand legs of his American Teen Tour sold out in 2017.

Following the monumental success of his debut album American Teen (certified Gold in Australia), Khalid is gearing up to break new records with his sophomore effort, Free Spirit (out now via Sony Music). In February, he gave fans a taste of what was to come by dropping lead single ‘Talk’, co-written with Disclosure, including their own remix of the song ‘Talk’ Disclosure VIP, adding to a stable of hits that’s truly staggering for an artist so young. Free Spirit also includes new tracks ‘Self’ and ‘My Bad’. The album features special guest John Mayer on the track ‘Outta My Head’.

From 7x Platinum ‘Young Dumb & Broke’ and 3x Platinum ‘Better’, to the stack of collabs with some of the world’s biggest artists, such as Normani on ‘Love Lies’ (5x Platinum), 6LACK and Ty Dolla $ign on ‘OTW’ (2x Platinum), Martin Garrix on ‘Ocean’ (2x Platinum), benny blanco and Halsey on ‘Eastside’, Shawn Mendes on ‘Youth’, Calvin Harris and Future on ‘Rollin’, Logic and Alessia Cara on ‘1-800-273-8255’, and close friend Billie Eilish on ‘lovely’, Khalid has truly become one of the most notable names in pop today.

The release of Free Spirit is accompanied by a companion short film directed by Emil Nava, which screened in cinemas for a limited 24 hour period and also allowed fans an exclusive chance to hear the record in full before its release. The film is creatively parallel to the album, adding visual elements to the music to tell stories of the beauty and the pain of Khalid’s childhood. Check out the film’s trailer here.

‘Khalid’s [performance] confirmed that he was now no longer an R&B star, or an alt-pop star, or anything else but a full-bore pop star, making young New Yorkers’ dreams come true for one Saturday night.’ – Billboard

‘I’m just one of many in that room praying his promise to return was not just talk – Khalid’s one New Zealand show was absolute perfection.’ – Newshub NZ

The last two years have seen Khalid take the industry by storm, quickly becoming a household name with his multiple chart-topping singles, internationally-acclaimed award nominations and wins, TV appearances, and brand campaigns. In 2017 Khalid won the MTV Video Music Award for Best New Artist, previously awarded to the likes of Justin Bieber, Fifth Harmony, Fetty Wap and more, and featured as the face of Forever 21’s Summer Digital Campaign, #F21xMusic, and Men’s Line. He went on to perform on The Tonight Show Starring Jimmy Fallon, The Ellen Degeneres Show, and Good Morning America to name a few, as well as at SXSW 2017, where he won MTV’s Woodie to Watch Award.

Since then, Khalid’s success has continued to skyrocket, with major co-signs from the likes of Elton John and Kendrick Lamar. He has made his mark through a plethora of international chart-topping singles, so it’s no surprise that in 2018, Khalid was nominated for a whopping five Grammy Awards, including Best New Artist, and also took out 4th place in the BBC Sound of 2018 poll.