King Coaster have had a busy start to 2019. With their latest single ‘Out of Time’ released at the beginning of May, they’re hot on the heels with the launch of their debut EP ‘Superflow’.
The EP is made up of six songs in total, including the latest single and the much loved ‘Miles Away’, which was released in January of this year and enthusiastically received by fans and critics alike, gaining Triple J airplay.
With a solid, punchy drum backdrop the bands music has everything it needs to appeal to a wide ranging audience. In fact the lofty sound of their recorded music defies the fact that as a live act these guys pack a serious blow to the crowd. With elements of QOTSA underlying their increasingly rock driven performances they’re the perfect combination of melody and grunge in an indie outfit.
‘Superflow’ was mixed and mastered at Inky Studios in Byron with local producer Jordan Power and a tour of the East Coast has been announced to coincide with the release. Dates include: 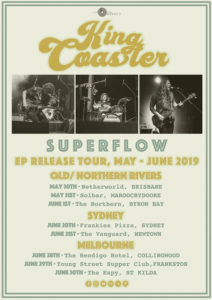