As Australias most rambunctious sons of extreme music, King Parrot celebrates their milestone of 10 years of being a band this year. What better way to do it than by head out around the country.

Taking this hellfire affair to the hoards of screaming punters across Australia. Of course, with the continued government lockdowns and realities of the current situation regarding the live music scene, a few dates have had to be nudged with Newcastle, Wollongong, and Sydney shows being moved. Check out the complete list of dates below. All tickets purchased for the original dates are valid for the new dates.

If you can not make the new dates, your ticket can be refunded from the purchase point. For now, at least we have a little treat. While King Parrot was in Sydney earlier in the year, they stopped in at Housefox Studios for a live recording session and an interview with studio owner Ryan Miller. I

In the interview below, the guys touch on upcoming album preparation and then dig into some proper KP stories. Beers, tours, massive roadside turds & blood on the high seas it’s all there. Plus, we get a great live studio recording of “Disgrace Yourself” taken from their third studio album ‘Ugly Produce’ to top it all off. So sit back and enjoy a proper laugh with the guys and a killer live tune. And get ready for when King Parrot brings this hell-raising live show to your town over the next five months. 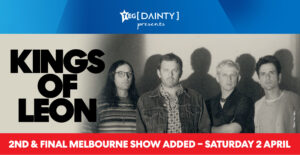 Next post News: KINGS OF LEON ANNOUNCE A SECOND AND FINAL MELBOURNE SHOW FOR 2022!
Search
Menu