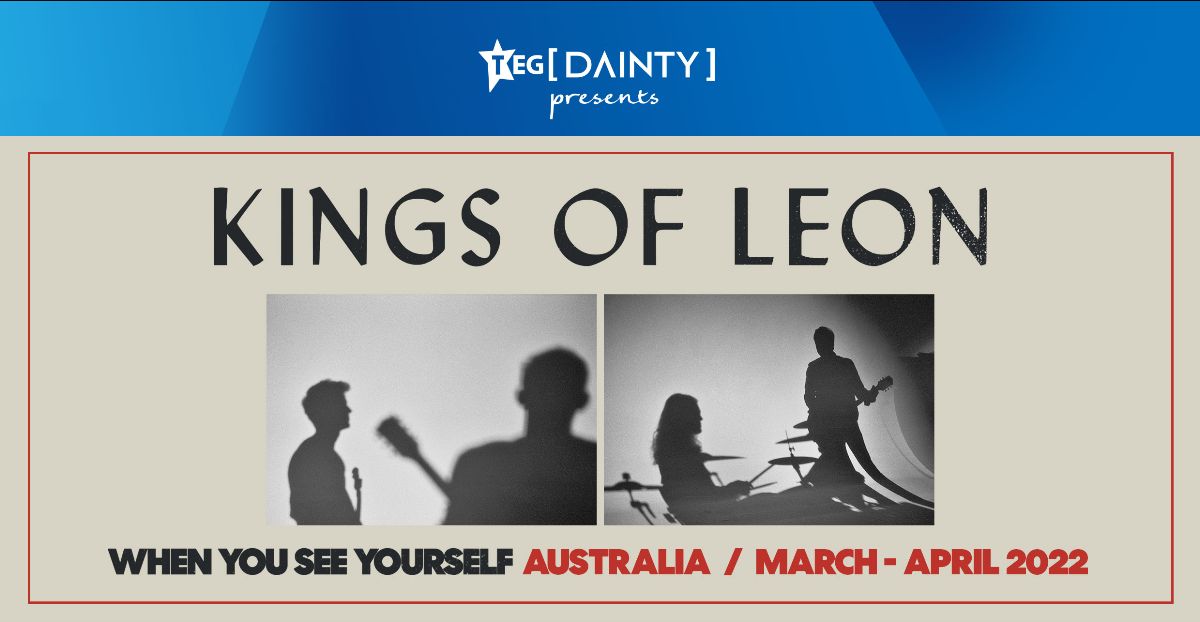 TOURING AUSTRALIA FOR THE FIRST TIME IN OVER 10 YEARS

Following the release of their recent Australian Number One album ‘When You See Yourself’, Kings of Leon are delighted to announce their first full Australian tour in over 10 years. The set will include songs from all 8 of their albums.

The Australian tour kicks off in Sydney on Saturday 26th March 2022 before visiting Brisbane, Melbourne, Adelaide and Perth.

Caleb (guitar, vocals) said “As a band, we feed off the energy our audiences bring and the last time we toured Australia the atmosphere was electric. We can’t wait to get back down there and perform for you all again!”

Nathan (drums) added: “We’re so looking forward to getting back out on the road with our touring family: we still have the same sound man and guitar tech that we had on our very first show and we also have cousins that are part of our crew. But, most of all, it’s the shared experience of performing in front of our fans from all corners of the globe, in person, that we miss. Let’s all come together and celebrate the power of live music.”

Since Kings of Leon first captivated a global audience with the release of their debut EP Holy Roller Novocaine, back in 2003, Australia has been obsessed with this band of brothers (and one cousin). In 2008, Kings of Leon’s Only By The Night record – which contains the band’s three most-streamed songs in this country (the chart-topping Sex On Fire, Use Somebody (which peaked at #2) and Closer – was Australia’s best-selling album of the year.

After honing their craft for 20 years, Kings of Leon have cemented their position as one of the world’s top rock acts, headlining international bucket-list festivals including Glastonbury, Coachella, Bonnaroo, Lollapalooza’s in Chicago, Berlin, Sao Paulo and Santiago, to name but a few, along with a record breaking 4 nights at London’s Hyde Park.

Paul Dainty, AM President/CEO said, “Kings of Leon’s Australian shows in 2011 were nothing short of phenomenal and this time around the band will also be riding high after celebrating yet another #1-charting album in this country. We can’t wait to welcome Kings Of Leon back into Australian arenas.”

Don’t miss your chance to catch Kings of Leon LIVE!

OR
Kings Of Leon (whenyouseeyourself.com)