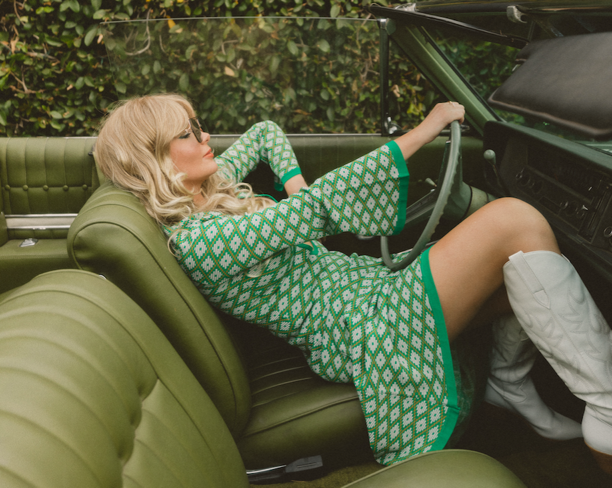 Often among the literal and metaphorical ruins, plenty of life’s gems and lessons can be found; and for Australian producer and DJ GEM, heartrending gold has evolved from heartbreak and self discovery, with her stunning new single Ruins, out today, softly and serenely billowing you away with its empowered authenticity. A lesson in healing and dreamy indie pop, Ruins also provides a glance into GEM’s upcoming new EP Healing Feelings which will officially release on Friday September 30.

Gentle, undulating and flowing with swooning melodics, Ruins pits invigorating yet simplistic textures against GEM’s ethereal vocals. Like a meditative surge of warmth and fresh renewal, Ruins greets as a spiritual and slow-burning delight, softly building with sultry beats, while also acting as the perfect introduction to the broader EP Healing Feelings, as GEM explains, “I wanted the EP to reintroduce myself, starting with the parts that I hide the most. The story begins with Ruins. I was holding on so tightly to an idea that didn’t exist anymore – once I let that relationship shatter, the breakthrough begun and the healing started. I wanted the EP to start in mess, tangled, unsure, inching your way into the day as we all sometimes do and slowly, step by step, track by track find that voice, that inner knowing that sets you right again. I made a very deliberate decision to connect all the pieces of myself and make whole, regardless how popular that may or may not be”. The single is accompanied by a live video featuring Martin Estrada on guitar (Selena Gomez, Macy Gray, Gashi, Say Grace, Snoop Dog).

Balancing pensive delivery with focused intention, GEM’s dreamy blend of liberating lyricism and transformative soundscapes practically leap out of the speakers and transports you body and soul into the subtle beauty of the world around on her upcoming EP; from the meditative experimental opener Soul Bath, to the empowering spoken word of Heartfelt, the lush flow of Innerbloom and the vivid vibration of Remedy, complete with a gospel choir, the broader Healing Feelings EP offers a tangible sonic feast, simultaneously reintroducing GEM to the world while also stoically showcasing GEM’s pursuit of connection in unexpected times alongside electronic undertones, as she reveals, “Truth be told, this wasn’t the EP I started to make. Or the one I was supposed to make. I felt myself being pulled towards a very conscious creation process. I started producing my own spiritual music and decided that I would blend wellness benefits into the mix so it was more than just another song in the background. I wanted to produce a project that would remind you on a deep level that there are better days ahead, that you can stop and start again at any moment and that you can manifest a healthy beautiful life – not something that would win me awards with the cool kids and I to make peace with that inside my heart. I was told New Age music was boring and that no one would listen, I was told that positivity was lame and people wouldn’t connect with it. That I should dig deeper past just things I love. That music should express pain. But how can I dig past love? Isn’t love the very reason for existing?”.

Embracing life’s highs, lows and everything in between, ultimately emerging with tales of insecurity, sex, the divine feminine and being the architect of all of your best days still to come, Healing Feelings wholeheartedly encapsulates its transformative moniker, merging clever and

calm downtempo-meets-new-age beauty alongside polished production, splashes of neo soul and a significant lack of ego throughout the charming six tracks. And while undeniably flexing the scintillating creative know-how that has seen GEM snag millions of streams to date on Spotify so far alone as she continues to build into one of Australia’s most illustrious musical exports, the undeniable root behind Healing Feelings is an inescapable and genuine peace as much as it is a window into GEM’s own healing, as she explains, “I wanted to use the EP to openly talk about insecurities and not owning your ideas and how I’d been tip toeing and circling around my truest dream, as if shrinking and unthinking it was somehow safe keeping. I wanted a dreamy, inspiring musical blend, with empowering words and authentic messages. I longed for the music to carry you into the sunrise and just sit there, amongst all the beauty quietly complementing the colours of dawn. The theme is healing your feelings, cleansing and starting afresh. Wherever you may be on your journey”.

A trailblazing force in the musical world, GEM has tirelessly worked to innovate and lead the way for local artists into the international scene. Having previously been named in the Top 5 female music producers worldwide by Showbiz Magazine, GEM, currently based in Los Angeles has been nominated twice at the IMAs for Best Album (Electronic) and Producer Of The Year, as well as having her debut album The2070s hit #2 on the Australian iTunes Electronic Chart back in 2019. More recently, GEM was also one of only six producers selected globally to participate in the prestigious Grammy NEXT program, mentoring under Jeff Gitty of The Weeknd, HER and John Legend fame, and has also appeared at numerous high-profile gigs including TED Talks, the Emmys pre-party, Pride Miami and Pride NYC amongst countless others.

Percolating deep at the core of the GEM success story is ultimately a desire to explore her own journey, while inspiring others to do the same; something she delivers in stunning spades both on Ruins and the broader EP her sublime new track calls home, as she concludes, “I create music to make yourself better too. Music to raise your vibration with. Music that will encourage you to find all of the parts of yourself that you also hide and have the confidence to bring those to the world. Music that makes you dream more vividly, music that flips this antiquated narrative we’ve been sold for generations that shadowy, non-transparent, pre-fabricated, limiting and isolating story lines are the only ones worth selling. I am not here to ‘fake it until I make it’, I am here to share how I manage my own health using what I do (music production) in the hopes you can take inspiration from it and it makes your life a little sweeter too”. For anyone grappling with heartbreak, healing or just in need of a lush and intuitive listen, Ruins is a curative triumph against the chaos of life, and a perfect scene-setter for GEM’s next sonic chapter.

Ruins is out today, Thursday September 15.

Healing Feelings is due for release on Friday September 30.