“Seriously? Morrison is meant to bop in his car to a song complaining about being an Aboriginal who “doesn’t speak my father’s tongue”? Is music listening a political activity or an aesthetic one? Should we listen out of pity or for our pleasure? Can Morrison please be allowed to listen to music to please himself, rather than to further some political agenda?” – Andrew Bolt

Of all the amazing things that have been happening in my world of late, (from ARIA nominations, Dreamtime & J Awards to sold out shows and more…) I think one of my biggest highlights was seeing Native Tongue referenced in Andrew Bolt’s column.

I’d like to say a big thank you to Andrew Bolt for his recent shout out and also congratulate him on doing such an excellent job of demonstrating some of the reasons why writing a song and an album like Native Tongue was so important to me. (Whether he intended to or not).

While defending Scott Morrison’s right to listen to whatever music he likes, Mr. Bolt managed to highlight a huge failing in the approach to leadership and governance in this country… (one of many if we are being honest)… you can read the article here if you like:
https://www.heraldsun.com.au/blogs/andrew-bolt/academic-complains-morrisons-music-is-too-white/news-story/ee33826c54898e3b701e3131fd01e138

Unfortunately, I think Mr. Bolt may have missed some of the nuances of my song.

The song ‘Native Tongue’ is not a ‘complaint’ as he suggested, and I think to view it as complaining would be slightly reductive, but that’s just my opinion. I wrote this song as an expression of some complex emotions, such as grief for a loss of culture and Indigenous languages and other impacts of assimilation, colonisation and the white-washing of non-western cultures. This is not a song of self-pity, it is a song of self-empowerment.

Due to the overwhelming response I have received to this song and the stories that people have since shared with me of their own experiences, I am inclined to think that this is a topic that resonates with a LOT more of Scott Morrison’s constituents than either he or Mr. Bolt might like to recognise. And while my exact mixed heritage may not be the norm, the feelings I raise in the song are more common than he might realise. Regardless of whether ScoMo can personally relate to the lyrics or the experience, as a leader, he should be concerned with how his constituents relate to this song and what they experience.

I believe that good leadership is about listening.

I also believe that music is a powerful communication tool, one that transgresses time, geography, age, gender and race. Music can unite, divide, and inspire revolutions, across generations.

Mr. Bolt is wrong to suggest that listening to music is PURELY an aesthetic pursuit. Sure, we all listen to music for pleasure, but music has always held a mirror to society. It has always been a snapshot of the issues that affect the people.

Sure, ScoMO should listen to whatever music he likes when he is turning those snags on his BBQ or cruisin’ around in his luxury car, but if he cared about what is happening out in this Country that he is supposedly leading he would listen to more of our voices.

So thank you Mr. Bolt, for highlighting an important issue and including me in the conversation.

Original Article:
An academic, Catherine Strong from RMIT University, is shocked and dismayed by the music Scott Morrison plays in the car when driving to Canberra

On Monday, Prime Minister Scott Morrison, in his latest attempt to brand himself a “man of the people”, released a Spotify playlist of his favourite songs. His fair dinkum credentials, however, quickly took a blow as the lack of Australian artists in the list was pointed out. Only one of the 146 songs was by an Australian band…

In response to this criticism, Morrison drew attention to another of his playlists, an Australian one (with a smattering of overseas artists). But, like the Liberal Party more generally, it featured a lot of white males, mostly a bit past their use-by date.

And old white males are the new Jews. To be despised, blamed for all ills, and shunned.

To think an academic actually pours through the playlist and tut-tuts and judges it by the yardstick of identity politics:
Indeed this second “Oz” playlist from the PM has exactly one woman in it, Martha from Martha and the Muffins (a Canadian band). It draws heavily on what might be called “classic pub rock” from the 1970s and ’80s, with bands like INXS, AC/DC and – bizarrely, given their politics – Midnight Oil dominating. The few songs from the 1990s by the Cruel Sea and You Am I are in the same vein musically. There is nothing on the list more recent than this.

These lists are significant as they give us some insight into what our prime minister sees as valuable in popular culture.

No, they just give us an insight into what makes his heart sing. What reminds him of his youth. What touches him most personally.

Firstly, he doesn’t even think of Australian content. Then, when pushed, he includes a very narrow selection of a specific type of music that represents only a small proportion of the population, or of the nation’s creative output. Women – not to mention First Nations artists, and young people – don’t get listened to (at least musically) by the PM.

No, and I wonder how much Turkish music, say, Strong listens to. How about Rembetika?

What, none? What’s she got against Turks and Greeks?

Anyone can play that dumb game and end up with nothing but a sneer.

This list – and the previous one, which is also man-heavy, with just 15 of its 92 acts featuring one or more woman in the line-up – is a very telling reminder of what it is that women are up against in the music industry. We know that currently Australian women represent only around one-fifth of those making money from music.

Maybe that’s because most people – men AND women – don’t like enough of that music to pay more for it.

This type of action has helped bring to light the incredible music being made in Australia today. From Mojo Juju’s work grappling with what it means to be Australian, to Camp Cope’s campaigning to make the places where live music happens safer for everyone, to electronic artists like Alice Ivy, we are witnessing a new wave of powerful, innovative creators claiming space.

However, such waves have come before, and ongoing work is needed to prevent the music industry from getting bored with the “women issue” and reverting to its masculine status quo.

Seriously? Morrison is meant to bop in his car to a song complaining about being an Aboriginal who “doesn’t speak my father’s tongue”?
Is music listening a political activity or an aesthetic one? Should we listen out of pity or for our pleasure?

Lists by powerful men, whether cultural critics or prime ministers, that only call out to other men reinforce this canon, and the idea more broadly that women don’t make art of worth. The fact that Morrison didn’t include acts such as The Divinyls or Renee Geyer – artists from the 1970s and ’80s who fit well within the pub rock genre he is focusing on – speaks to this erasure.

Can Morrison please be allowed to listen to music to please himself, rather than to further some political agenda? 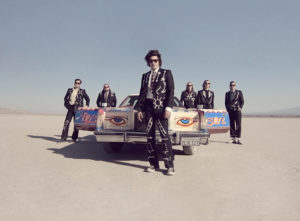